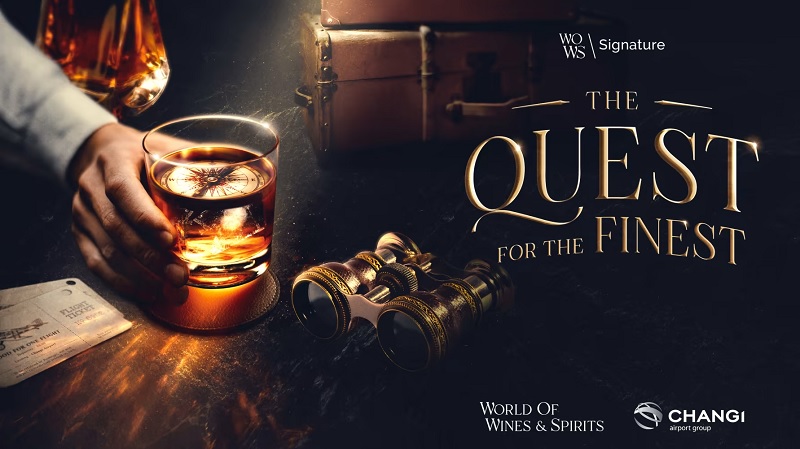 From 30 September to 31 December 2022, Changi Airport will present its inaugural World of Wines and Spirits (WOWS). In partnership with Lotte Duty Free, #WorldOfWinesAndSpirits will showcase the world’s most internationally acclaimed, exclusive and premium wines and spirits, featuring over 200 of the finest products from more than 75 brands, including first-in-the-region rarities from renowned labels.

Throughout this period, all lovers of exquisite wines and spirits will be welcomed to purchase from a curated selection on the WOWS online portal (http://wows.changiairport.com) from 30 September. The extensive e-catalogue includes rare gems from esteemed labels like Bowmore, The Macallan, Midleton, The Singleton and Penfolds. WOWS patrons can expect a personalised shopping experience: once interest in an item has been indicated, a Changi Airport or Lotte shopping concierge will reach out to serve them, facilitating queries and payment over WhatsApp, phone call, or in person.

From 14 to 24 October, VIPs from Changi Rewards, Lotte and other Changi partners will be exclusively invited to an online auction held on the WOWS portal, where two of the most prized items in the world of spirits from brands including Hennessy will be up for bid, starting at SGD $225,000 and SGD $130,000 respectively.

Following the auction, VIPs will be hosted at the exclusive WOWS signature event from 28 to 30 October, held at the iconic Jewel Changi Airport. The prestigious three-day by-invite-only event will be an experiential feast for the senses, with masterclasses hosted by industry experts, artistic performances, and tastings from a selected range of rare and fine items.

“We are thrilled to present the first-ever World of Wines and Spirits signature event here at Changi Airport. Liquor is one of the best-selling categories among our travellers and we have been working with many brands and partners to bring in the most sought-after wines and spirits from around the world. WOWS is a culmination of our efforts and we look forward to offering our passengers access to a unique collection of some of the world’s rarest and finest products,” said Lim Peck Hoon, Executive Vice President, Commercial of Changi Airport Group.

“The Lotte team has specially curated an excellent collection for WOWS. We are eager to see this brilliant collaboration with Changi Airport Group and our suppliers come to full fruition. This event is a vital milestone for Lotte and we look forward to keeping the momentum going on future projects like WOWS,” said Edward Im, Managing Director Lotte Duty Free Singapore.

The WOWS catalogue: A specially curated collection of the finest wines and spirits

Alcohol epicureans can look forward to these highlights and over 200 other choice wines and spirits on the WOWS portal, available for purchase at tax and duty-free prices until 31 December 2022. 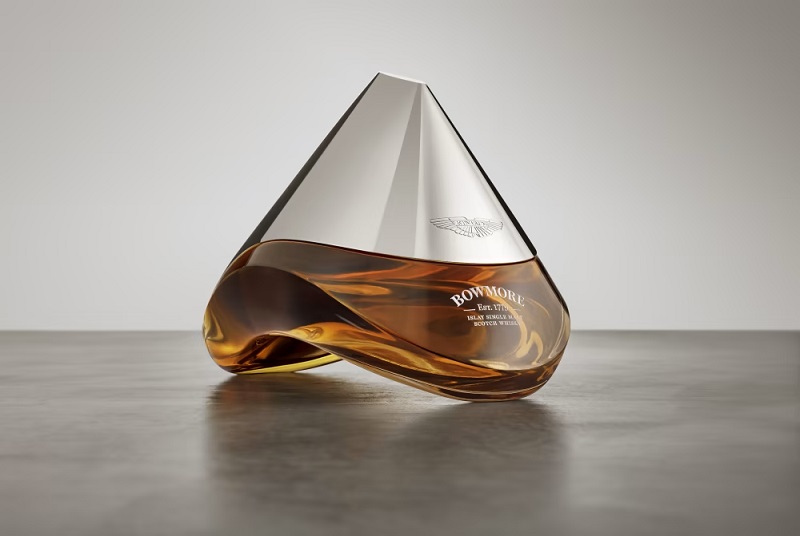 Admirers of single malt whiskies can look forward to the Bowmore ARC-52 making its travel retail debut in Southeast Asia at WOWS. The only bottle in the region, out of 100 bottles produced worldwide, will retail exclusively for SGD $130,000. The bottle is part of Bowmore’s Arc series celebrating its oldest single malt whisky, with leading design and innovation from Aston Martin. Matured for a remarkable 52 years in a marriage of two cask styles, the ARC-52 is married in two exact parts – 50% for an American Oak Hogshead and 50% from a European Oak Butt. Connoisseurs will appreciate its creamy and fruity aromas of vanilla and custard cream, carefully balanced with peach, pear, kumquat, mandarin, a hint of guava with herbal notes of fresh mint and eucalyptus. 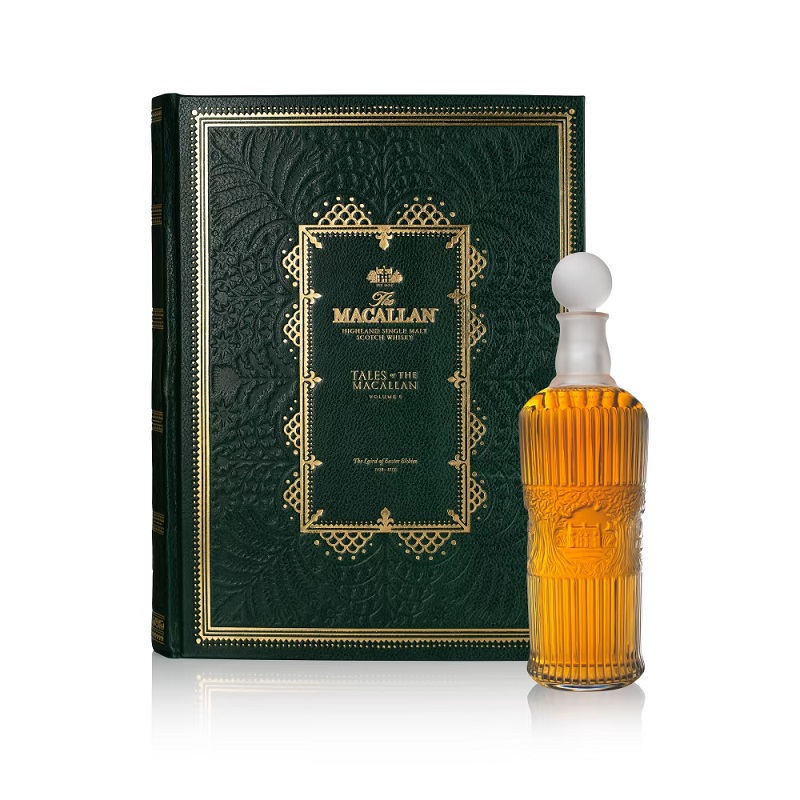 Originating from Scotland is one of the world’s most admired single-malt whisky – Tales of The Macallan Volume 1: The Laird of Easter Elchies. This is the first edition in a remarkable new series of single malts which pay tribute to The Macallan pioneers and their whisky making legacy. Tales of The Macallan Volume 1 is a homage to Captain John Grant, whose contribution paved the way for The Macallan and who brought the influence of nature and community spirit to the brand’s renowned single malt. Encased in a Lalique crystal decanter, the rare 1950 whisky is concealed within an extraordinary book telling the story of John Grant and featuring beautiful illustrations by renowned illustrator, Andrew Davidson. Only 350 bottles have been produced worldwide and one bottle will retail exclusively at WOWS for SGD $120,000. 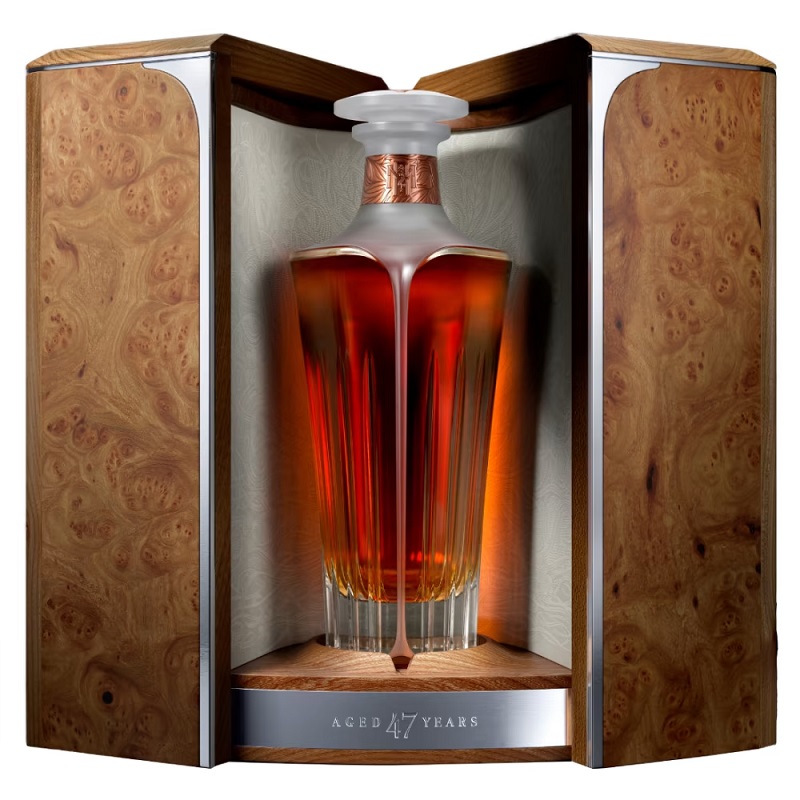 Only 97 bottles of Midleton Very Rare Silent Distillery Chapter 3 have ever been produced, and just one unit of this single pot still whiskey from Ireland will be available on the WOWS portal for SGD $63,000. A ‘silent’ distillery is one which has closed its doors and has been lost to ages past. These distilleries are achieving almost mythical status in the eye of the whisky collector, making their very rare bottlings highly sought-after. Midleton Distillery turned its keys for the last time in 1975, which makes this 47-year-old edition a truly rare gem. 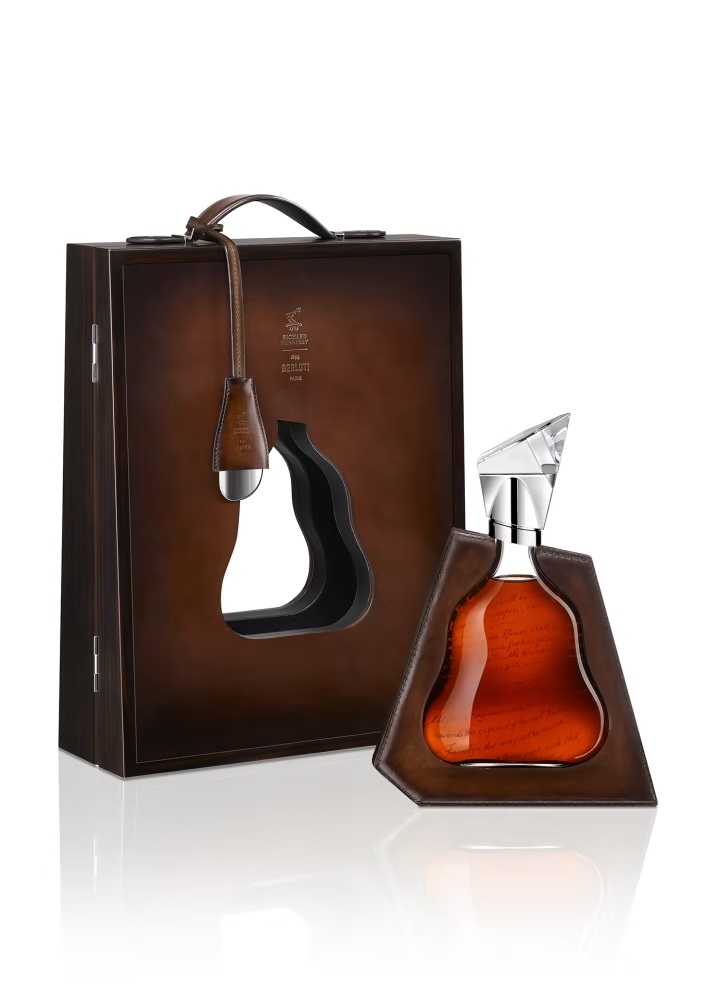 From one of the leading houses of cognacs that has more than 250 years of experience, comes one bottle of the Richard Hennessy x Berluti that will be retailed exclusively on the WOWS portal at SGD $57,900. Part of the Maison Hennessy Editions Rares collection, the item marries founder Richard Hennessy’s most exclusive, iconic blend with world-renowned Berluti’s masterpiece of luxury leather craftsmanship. The Richard Hennessy blend is produced in extremely limited quantities of twelve tierçons per year, using some of the world’s scarcest eaux-de-vie, which have been carefully selected and preserved in Hennessy’s Founder’s Cellar. The case comes with a custom-made cardholder that is stamped with Hennessy and Berluti’s logos 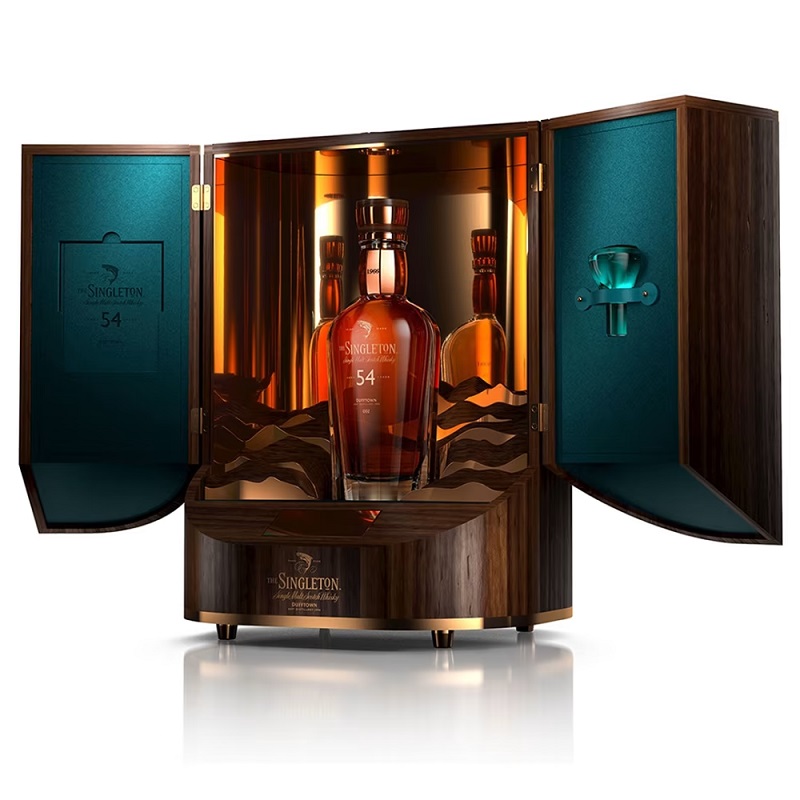 The Paragon of Time whiskies are the oldest and rarest that The Singleton has ever released. With only 235 bottles produced worldwide, a single decanter of the highly sought-after The Singleton 54 Paragon of Time II, Single Malt Scotch Whisky will be retailed at WOWS for SGD $56,800. Aged for 54 years, this dram celebrates a precious oak butt cask that was slowly hand-filled in Dufftown back in 1966 and sealed in time, then given an exquisite final maturation using a Pedro-Ximenez seasoned cask. This long-matured whisky is a beautiful balance of the old art of craft and modern finishing to present a precious product of layered, balanced and exceptional richness.

Specially selected for Lotte Duty Free is the Penfolds 2018 Superblend 802-B Imperial 6L. Carefully selected from the coveted 2018 South Australian vintage, the wines represent unique interpretations of the iconic Australian blend of cabernet sauvignon and shiraz. Its varietal composition is almost an even split, with cabernet sauvignon and shiraz contributing 55% and 45% of the blend respectively. The components were married immediately post vintage, completing 19 months maturation as a blend in French oak hogsheads. This wine will reward careful cellaring for several decades. One bottle will retail exclusively at WOWS for SGD $20,288.

Prices indicated above are tax and duty-free for eligible travellers with a valid boarding pass and passport at point of purchase and collection. Tax and duties will apply for purchases made by a non-traveller. A selected range will be sold at tax and duty-paid prices. Other T&Cs apply. 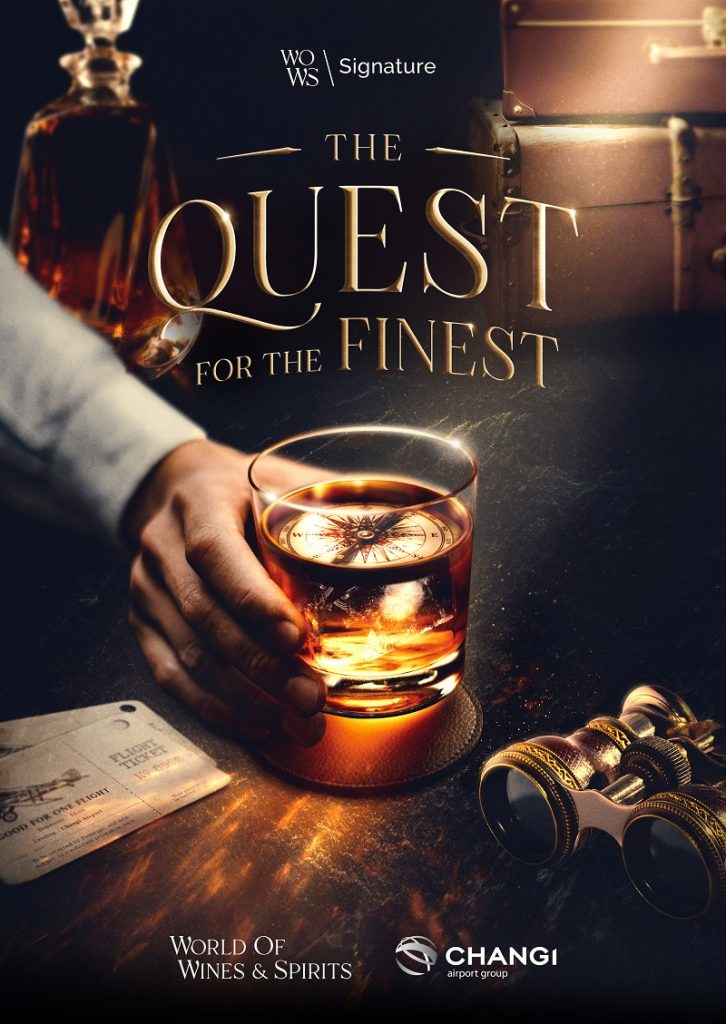 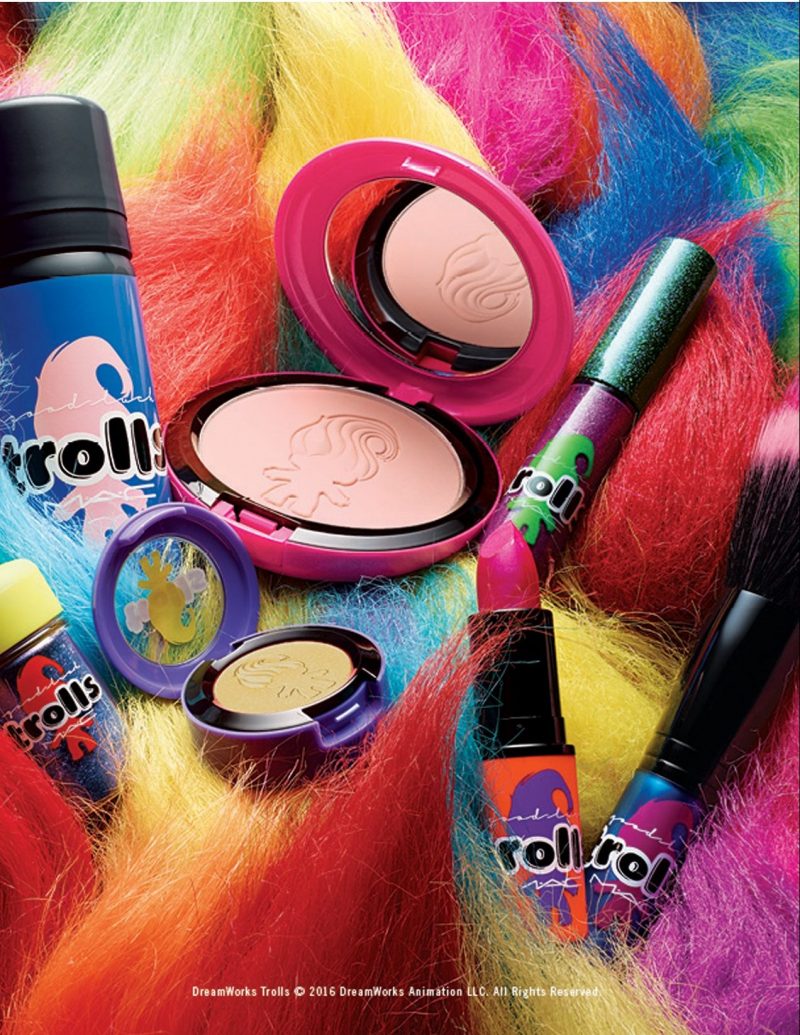 Now MAC Takes On The Trolls 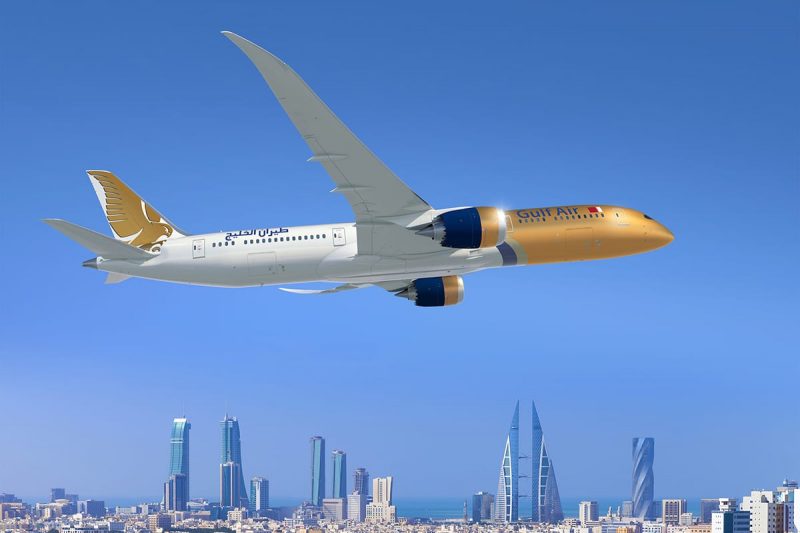 Bahrain Duty Free takes to the skies with Gulf Air 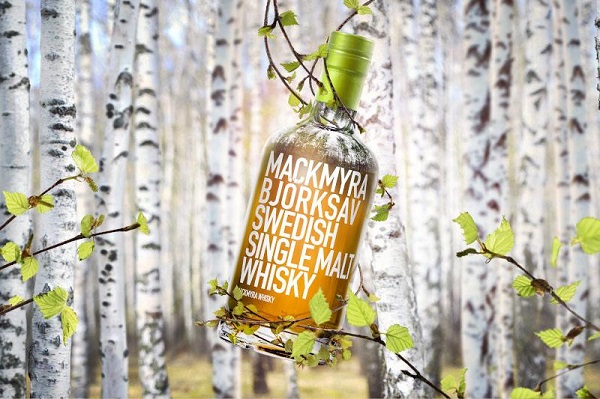