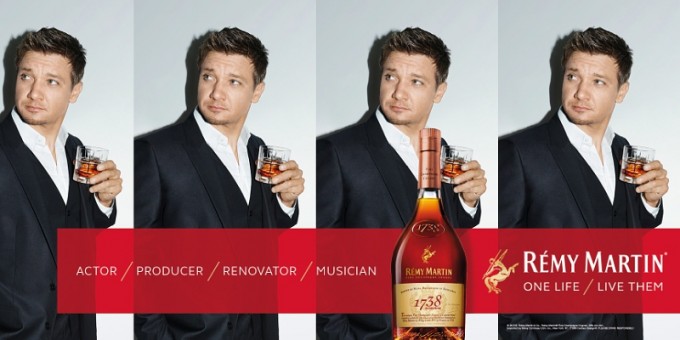 Rémy Martin Cognac announces the launch of its exciting new global campaign that recognizes and celebrates individual’s multi-talents. The campaign tagline, One Life/Live Them, identifies that today’s consumers are not defined by one talent or skill, but are multi-faceted and should be applauded for their many passions. Rémy Martin’s One Life/Live Them campaign encourages consumers to explore and celebrate all their talents.

Rémy Martin has partnered with two-time Academy Award® nominee Jeremy Renner whose many talents exemplify this lifestyle. “Actor, producer, musician and home renovator – Jeremy’s multifarious abilities make him the ideal representative for the brand’s One Life/Live Them campaign,” said Eric Vallat, CEO of Rémy Martin. “This is a new chapter in the history of Rémy Martin, and we’re delighted to be working with someone who so completely embodies the lifestyle that we are celebrating.”

“I am excited to work with this iconic brand and to help launch this new campaign. The story of how to live your life really resonates with me personally. I think to fully realize one’s potential you must take action, remain curious, embrace your failures as they are gifts, and honor your successes with humility. We are all many things and cannot and should not be defined by one thing, which is truly awesome,” said Renner.

Renner has received wide acclaim for his ability to embody characters of broad depth and appeal, from Sgt. James in Kathryn Bigelow’s award-winning Hurt Locker to a thief in Ben Affleck’s The Town, a mayor in American Hustle, a killer in the indie hit Dahmer and an antisocial bigot in Neo Ned. These performances have been coupled with blockbuster roles in such Hollywood super-productions as The Bourne Legacy, Mission Impossible and his inimitable role as Hawkeye in The Avengers.

Renner expanded his cinematic skills by creating a production outfit The Combine with Don Handfield in order to produce quality, character-driven content for TV and film. Their company released the crime thriller Kill the Messenger in 2014 and is currently working on the historical tale Knightfall for The History Channel. Renner is also an accomplished singer and musician, skilled on the keyboards, drums, guitar and vocals, playing in a band since his youth. Although best known as an actor, Renner has extended his creative talents into the field of home renovation, successfully renovating and selling several houses, turning this hobby into a flourishing business with fellow actor and home designer Kristoffer Winters.

Rémy Martin celebrated its campaign in the U.S. on October 20th, 2015 in New York City, where a 60 second commercial featuring the many talents of Jeremy Renner was previewed for VIP guests. The campaign officially launched nationwide on November 2nd. The commercial will broadcast on television including ESPN networks, TBS, Comedy Central, FX and during late night television shows, along with digital video platforms like Hulu and YouTube, among others. In addition to television and entertainment sites, a large emphasis will focus on a strong digital presence, with select online sites incorporating exclusive custom content such as interviews, unique videos and consumer events. A print execution with Jeremy Renner will also be featured beginning in December. The One Life/Live Them tagline, along with exclusive, behind the scenes footage, will appear prominently in the brand’s social media channels. This 360º campaign is the biggest campaign launch for Rémy Martin globally.

Rémy Martin remains committed to the core principles and values that its founders used to establish the company more than 290 years ago. Supporting the community, highlighting skills and revealing the talents of people and nature, honoring craftsmanship and embracing the luxury of time enables Rémy Martin to cultivate the most premium products. It is this depth of history and skillful mastery that goes into every bottle of Rémy Martin Cognac.

“Rémy Martin has always been about sharing – the fruits of our labors, the talents of our cellar masters, a range of cognacs crafted to suit different tastes but always with a distinctive style. It’s a philosophy which strikes us as tailor-made for today’s social networked world,” said Augustin Depardon, Executive Director of Rémy Martin. “The most inspiring people are never just one thing, they are diverse and multitalented and we can’t wait to discover their passions.”