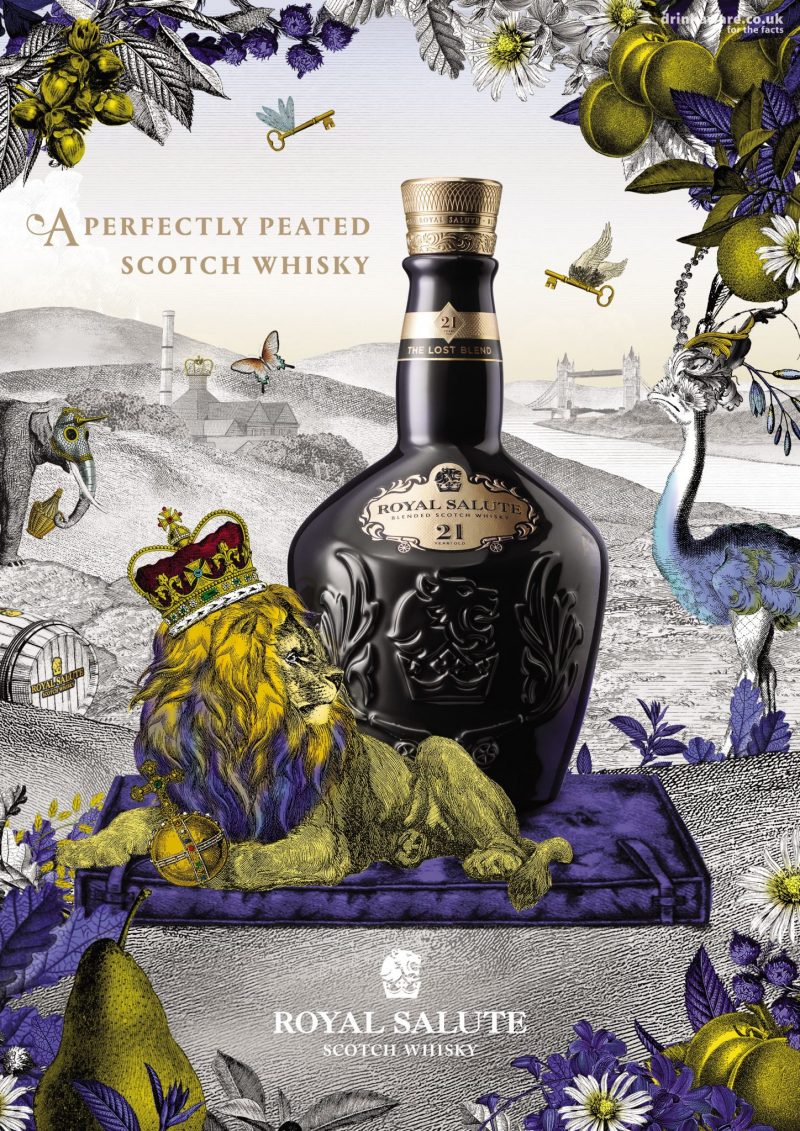 Royal Salute is toasting an all new addition to its signature 21 Year Old range with The Lost Blend. This stunning expression, the first peated whisky from Royal Salute, has been meticulously crafted of scarce and exceptional whiskies from distilleries no longer in production. It is presented in new, stunning packaging as part of a roll-out across the Royal Salute 21 Year Old range, and is available exclusively in global travel retail.

Launched exclusively in Singapore Duty Free with DFS from 1st May 2019, before becoming available in Duty Free stores around the world from July, The Lost Blend has been created by Royal Salute Master Blender, Sandy Hyslop, who carefully selected the finest aged whiskies from Scotland’s ‘lost’ distilleries to create the exceptional new blend,

Whisky connoisseurs and travellers will delight in notes of sweet orange and peaches intermingled with smouldering bonfire embers, balanced with the taste of sweet, juicy pears, orange rind and hazelnuts with aromatic peat for a long, smooth and smoky finish.

It’s the first time a new whisky has been added to Royal Salute’s 21 Year Old range and joins Royal Salute’s flagship whisky, The Signature Blend, which was originally created as a gift for the Coronation of Queen Elizabeth II in 1953, and has been steeped in royalty ever since.

The Lost Blend is presented in Royal Salute’s all new packaging, created by award-winning illustrator Kristjana S. Williams. Known internationally for her striking artwork, including on the album cover for Coldplay’s A Head Full of Dreams, Williams’ stunning design for Royal Salute is revealed on opening the door of the sleek, new box. Upon opening the ‘door’, Royal Salute fans enter an enchanting and unexpected world of colour and quirky characters, uniting to depict a contemporary take on the Scotch whisky’s rich history with illustrations of the British Royal Menagerie, once housed in the Tower of London, adorning the inside. 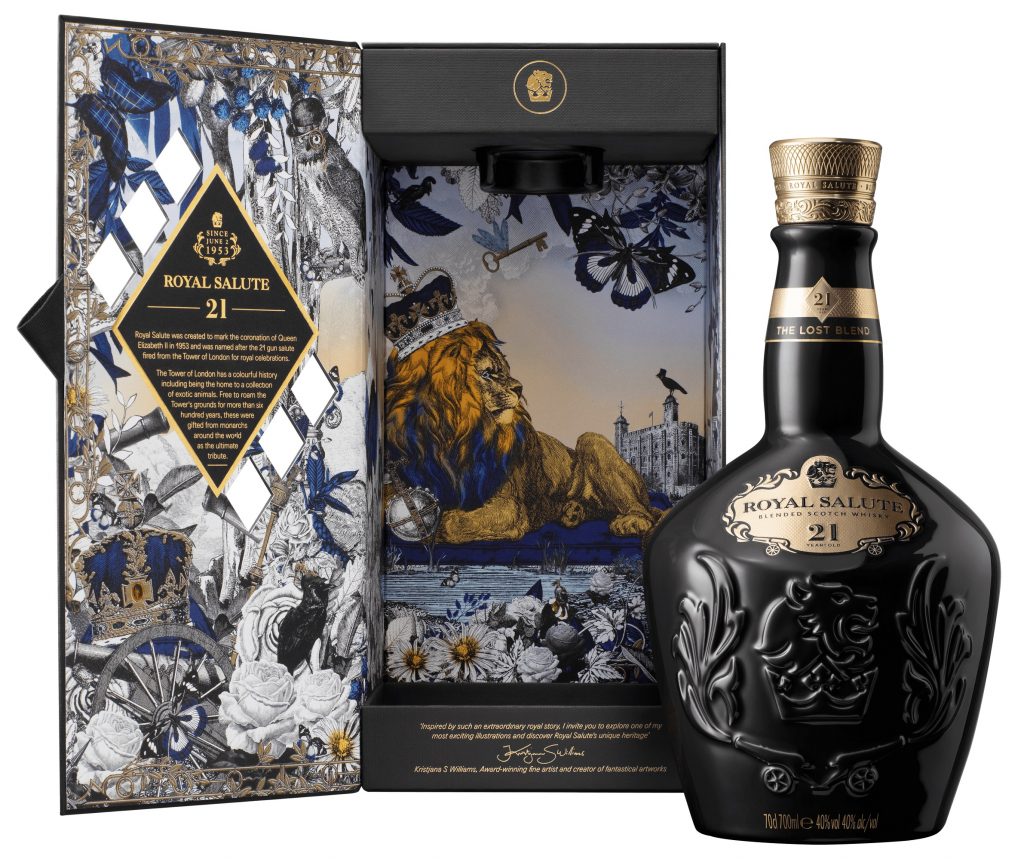 Royal Salute Master Blender, Sandy Hyslop, said of the blend: “The Lost Blend is a whisky to be simultaneously savoured and treasured. Made from the scarcest whiskies in our inventory, it celebrates the legacy of some of the best whisky distilleries in Scotland which I am proud to immortalise in an exceptional new 21 Year Old blend.

“Royal Salute starts where others end, at 21 years old and as Master Blender for a whisky of this calibre, there is no greater honour than protecting the continuity of the blend that was first created in 1953 and has remained exceptional ever since. But to have the opportunity to create something entirely new for this sensational portfolio – an elevated Scotch evoking the signature Royal Salute style but with its own unique characteristics – that’s truly the dream.”

Housed in a beautifully crafted porcelain flagon, the blend features the ‘lost’ Imperial Distillery at its heart. Named in honour of the British monarchy, the distillery was created in the same year as Queen Victoria’s Diamond Jubilee and was topped with a gilded cast iron crown in tribute to the momentous event. Although it opened in 1897, the Imperial Distillery only produced whisky for 46 years, leaving a limited and precious legacy.

Royal Salute Marketing Director, Mathieu Deslandes added: “There has never been a more exciting time for our brand. With a bold new look across our packaging and the exceptional Lost Blend the newest member of our 21 Year Old range, we’re raising the bar and we’re only just getting started.

“Given the importance of the channel, we wanted to release this exclusive blend exclusively to global travel retail. We know our consumers here seek products that not only deliver an unmatched quality but bring with them a rich, compelling story with unique provenance. This is something we strive for, ensuring our portfolio is at the cutting edge of Scotch whisky innovation while bursting with distinctive character. This latest creation is testament to this ambition. The Lost Blend is a whisky that’s earned its title, it really is fit for royalty.”

The Royal Salute 21 Year Old Lost Blend is available exclusively in Singapore Duty Free from May before becoming available in Duty Free stores around the world from July, RRP from USD $168. Find out more at: www.ishopchangi.com/brand/royal-salute#1 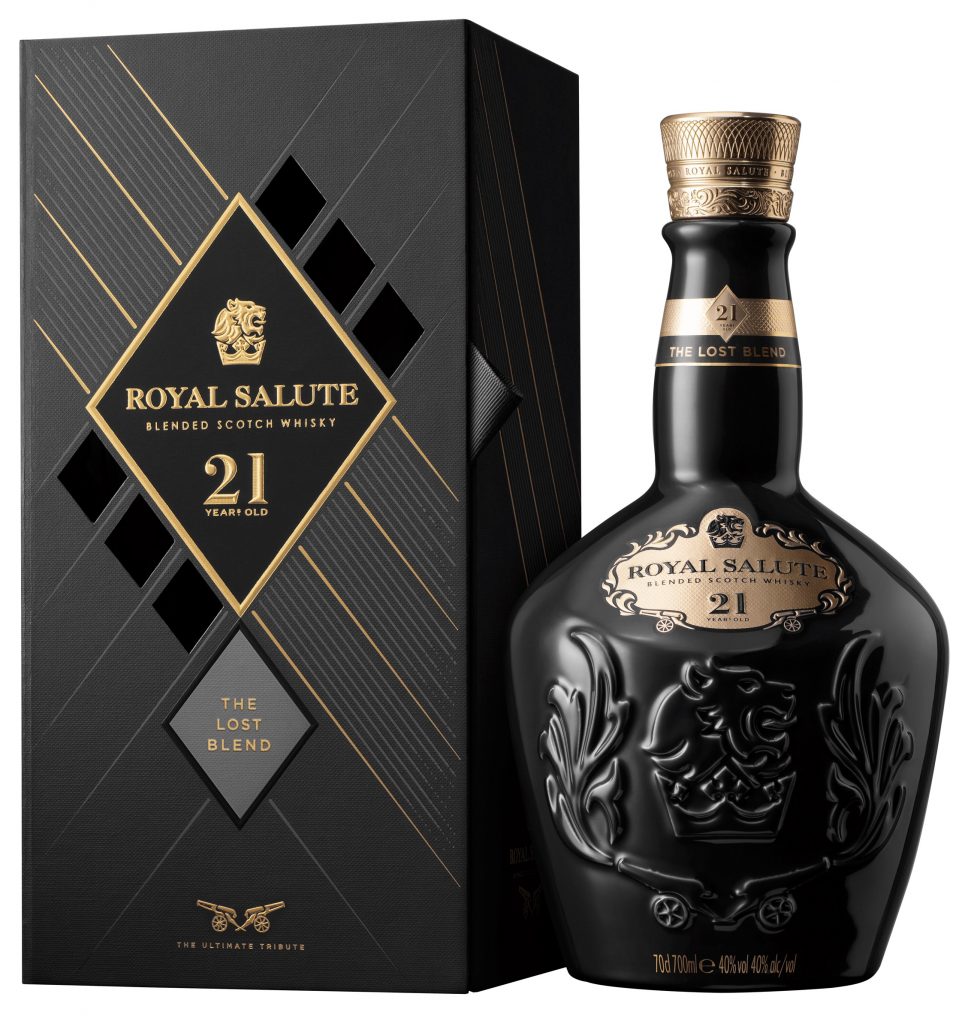 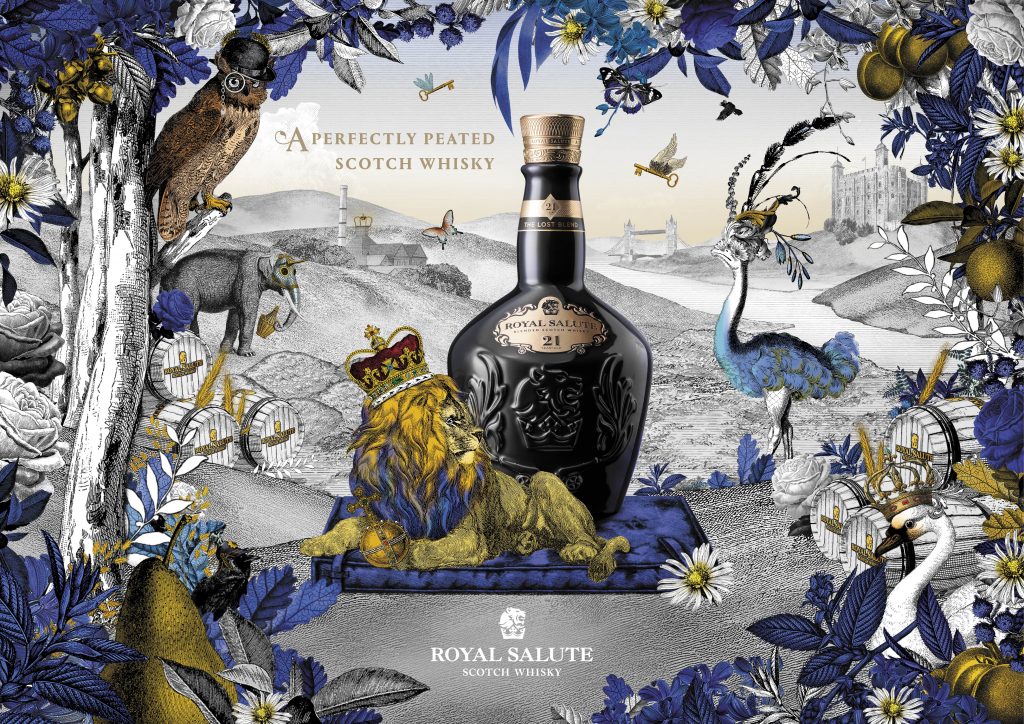 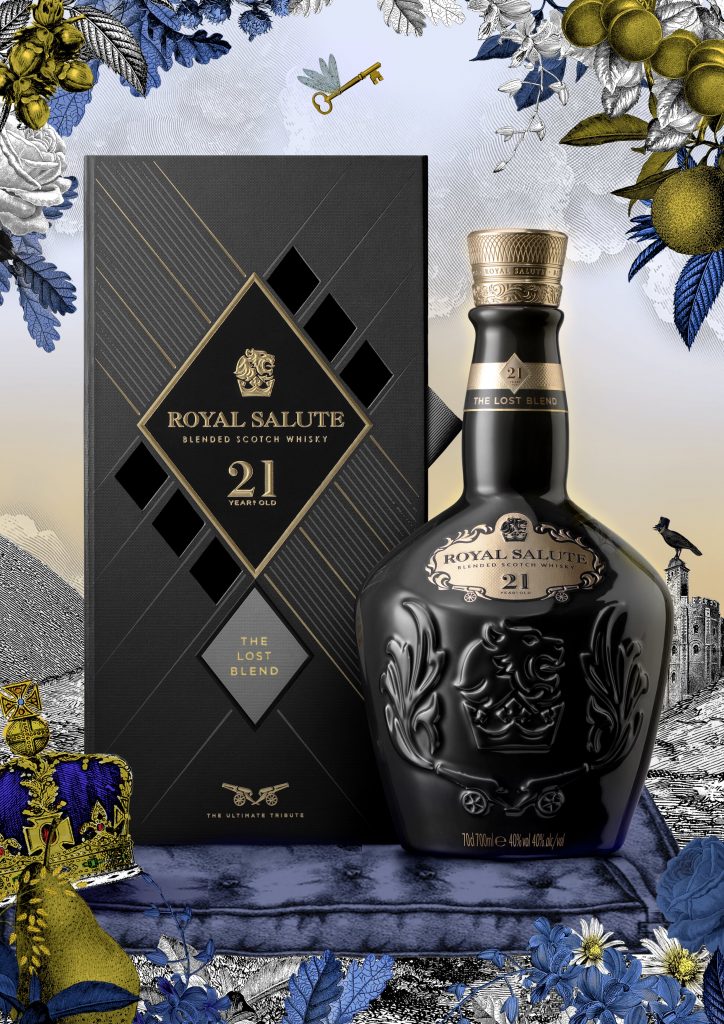 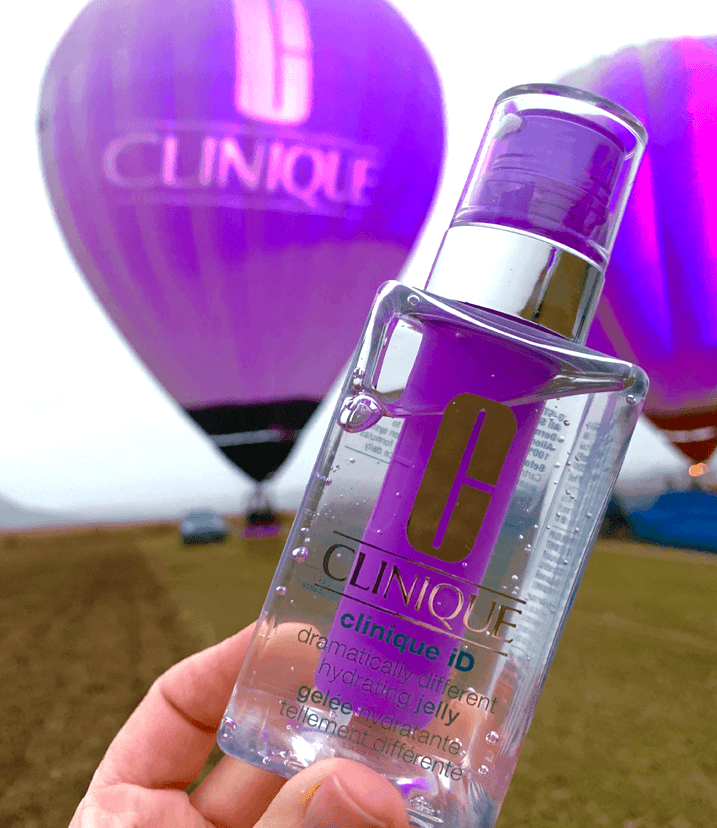 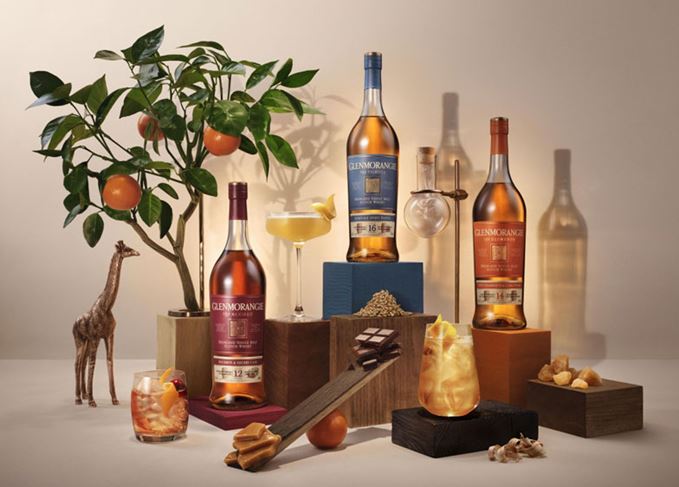