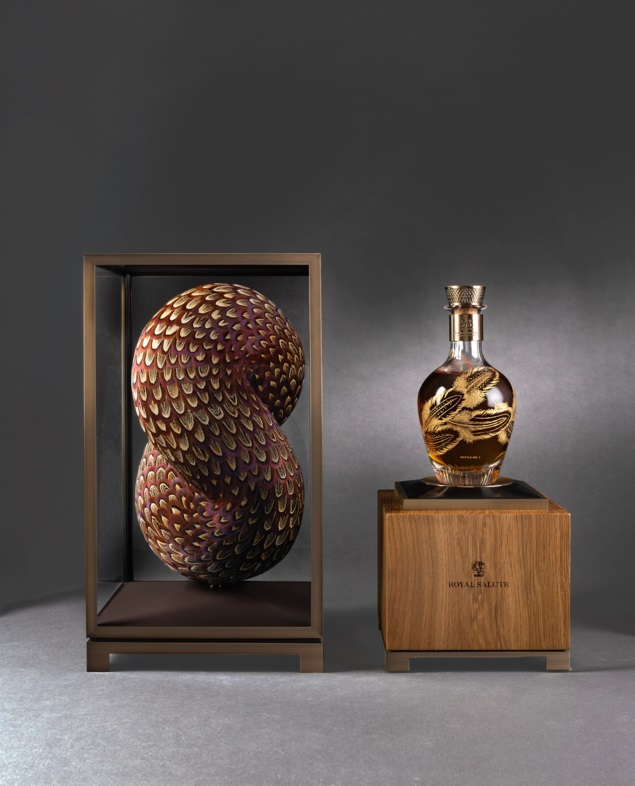 Royal Salute, the master of exceptionally aged Scotch whisky, has unveiled an enchanting new expression, the Royal Salute Forces of Nature by Kate MccGwire. The ultra-prestige release is the first iteration from Royal Salute’s new pinnacle collection entitled The Art of Wonder.

Releases from this collection will be created in collaboration with some of the most critically acclaimed artists of today, taking inspiration from whisky blending, to create a lasting tribute to the transformative power of creativity.

For the inaugural expression in the new series, Royal Salute has invited celebrated British sculptor, Kate MccGwire, who specialises in the medium of feathers, to create a one-of-a-kind piece to accompany an ultra-rare expression. Drawing inspiration from Royal Salute’s expertise in whisky blending, the distilleries and the blending process, Kate MccGwire’s magnificent body of work, named Forces of Nature, perfectly marries the two worlds of fine art and whisky.

Expertly crafted by Royal Salute Master Blender, Sandy Hyslop, the new expression released as part of the collection is a stunning and ultra-rare 53 Year Old blend, with just 21 decanters available, individually handblown by artisan glassmakers, Dartington Crystal. Each decanter is engraved with intricate feathers and gilded in 24-carat gold leaf, with magnificent curves inspired by Kate MccGwire’s enchanting sculptures. Furthermore, each decanter is accompanied by one of 21 pieces of art, called Paragon, created by Kate MccGwire exclusively for Royal Salute, using specially selected and sustainably sourced pheasant feathers, making it a true collector’s item. Together, they are housed in a hand-crafted wooden cabinet, accompanied by a beautiful art book detailing the collaboration between Royal Salute and the British sculptor.

The 53 Year Old age statement is one of the highest ages ever released by Royal Salute, alluding to the year 1953, in which Her Majesty Queen Elizabeth II was crowned and Royal Salute was established. The exquisite expression is rich and fruity on the nose, leading to notes of berries, candied walnuts, and sweet toasted oak with a long, rich, and slightly dry finish.

The first product reveal for global travel retail travellers, will take place at the inaugural World of Wines and Spirits (WOWS) event at Changi Airport and Royal Salute, The Art Edition will take part in a highly anticipated silent auction, held on the WOWs portal. The exclusive set will also be displayed from mid-November at the Royal Salute pop up boutique in Changi Airport Terminal 3, with shoppers expected to get immersed in the Forces of Nature by Kate MccGwire theme.

Speaking about the new release, Liya Zhang, Vice President of Marketing at Pernod Ricard Global Travel Retail commented; “This special ultra-prestige release is another example of Royal Salute’s continued creativity and exquisite craftmanship. With collectability and investment important in this segment, we have noticed a thirst for truly luxury items, so I’m confident this unique expression will excite travellers around the world.”

Speaking of the Royal Salute Forces of Nature release by Kate MccGwire, Sandy Hyslop says, “For the first volume from the Art of Wonder collection, I wanted to create an outstanding expression that reflected Royal Salute’s desire to push individual craft beyond expectation. To do that, together with my expert team, we crafted an opulent 53 Year Old blend, one of the highest ages we have ever released. This is a thrilling moment, and it’s been a privilege to blend such rare and precious whiskies at the pinnacle of what is achievable with delicate high-aged stock laid down by my predecessors”.

Commenting on her collaboration with Royal Salute, Kate MccGwire says: “For this body of work, I was inspired by the unpredictable and ever-changing ‘Forces of Nature’ that influence the forms and energy that embody my sculptures. The three pieces I have created exclusively for Royal Salute celebrate the world of whisky and use regal pheasant feathers which are so beautifully figured with luminous amber in the brown, reminiscent of a well-aged blend. After visiting the Strathisla distillery, I was also inspired by Royal Salute’s copper whisky stills, and have used the material in two of the pieces I’ve created, Protean and Plethora.”

Due for release from October 2022 onwards, five of the 21 precious editions of Royal Salute Forces of Nature by Kate MccGwire will be available to purchase at selected airports for RRP $90,000.

Royal Salute is pleased to be partnering with two key art events where it will exhibit the remainder of Kate MccGwire’s Forces of Nature body of work, with a specially designed piece for each event. The two exhibition pieces, Plethora and Protean, marry feathers with copper whisky stills to reflect the Scottish landscape of hills and water, and the effect that nature has on whisky making. Protean, the largest of the installations, will be revealed at Frieze, London on the 12th of October 2022, whilst Plethora will be unveiled for the first time at the Fosun Foundation in Shanghai in November 2022. 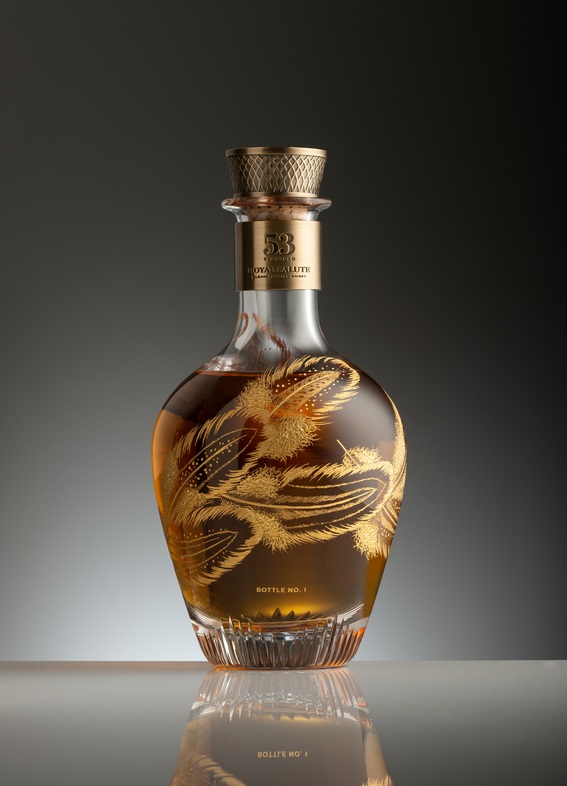 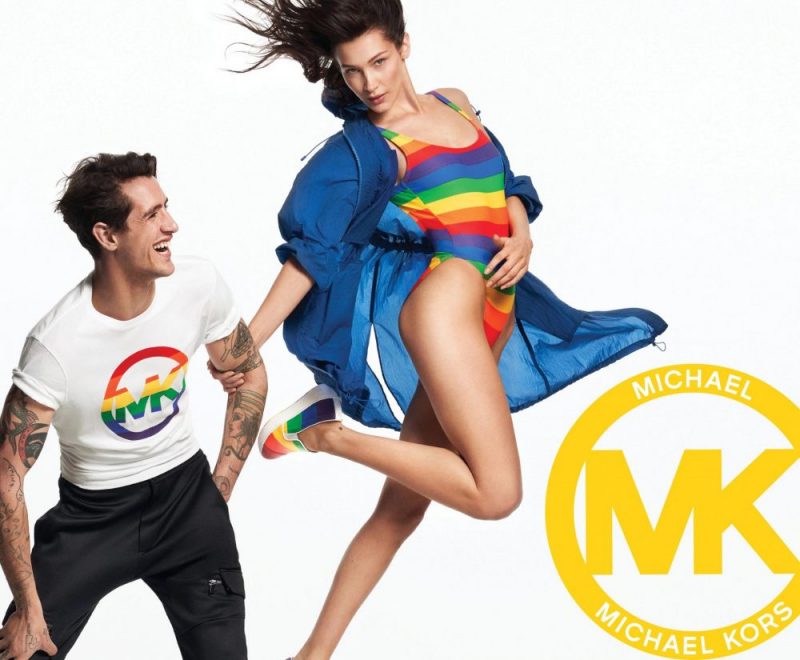 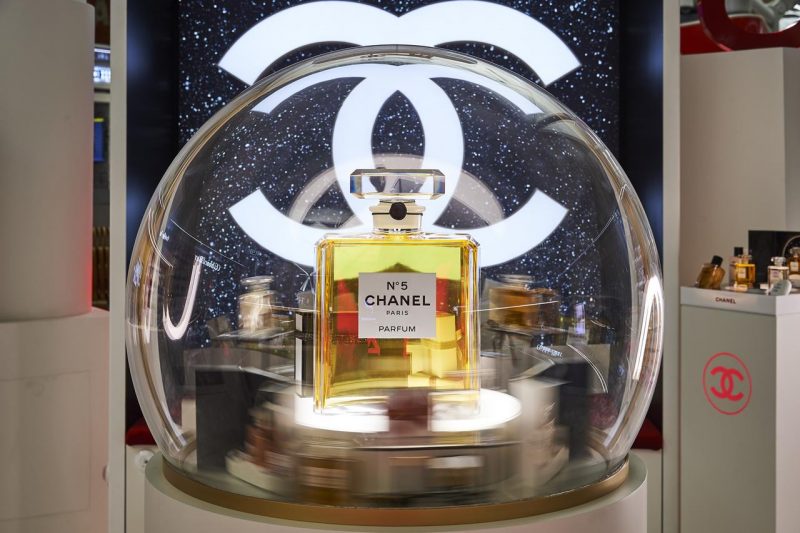 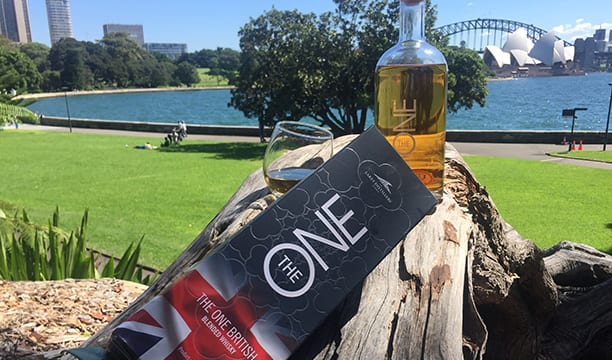