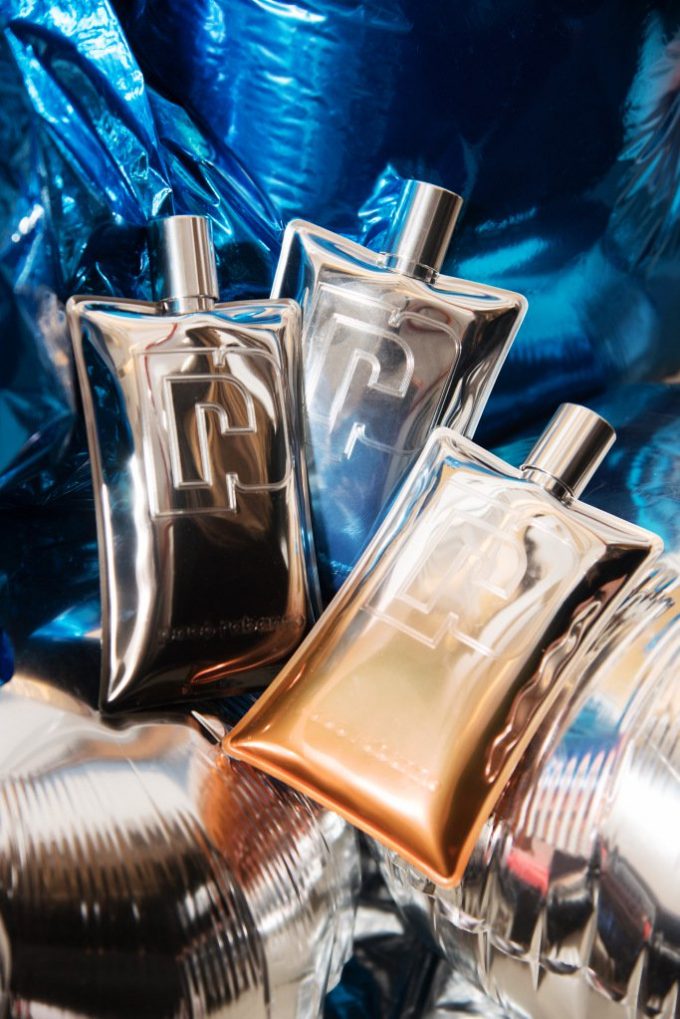 Paco Rabanne’s Pacollection of fragrances aims to break the rules — from its soft packaging to the line’s atypical juices, purely digital communication fronted by characters, and in-store merchandising.

The project is the first embodiment of the house’s One Rabanne strategy, launched two years ago, which melds its fashion and perfume activities. Pacollection also represents the first fragrances conceived by the brand’s creative director Julien Dossena. “I was really excited to work on that project,” Dossena told WWD.

His first Paco Rabanne fashion campaign featured a young woman in an undefined place and time, holding what resembled astronauts’ food, in soft aluminum. That reminded Dossena of the Capri Sun squeeze drinks he loved as a teen.

“So it was that twist — you don’t know if it’s food from the future or if she is a young lady, after having fun with her friends, [drinking] a fruit juice with Paco Rabanne [written] on it,” said Dossena. “It’s this utopic feeling that is really part of the brand aesthetic.” That was infused into the perfume project. 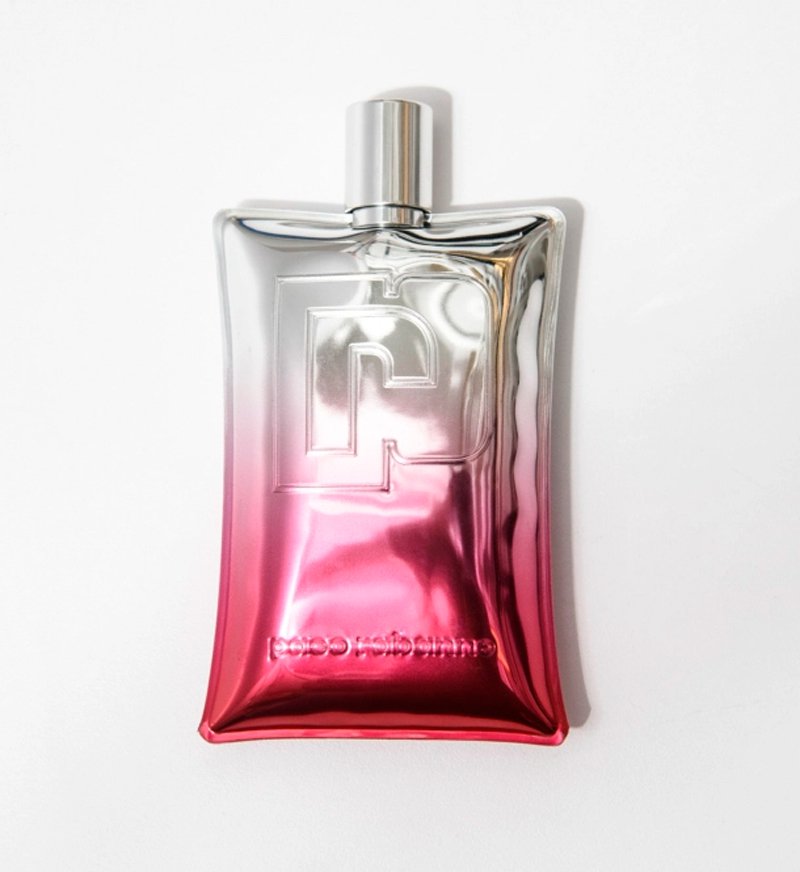 He called Pacollection’s packaging, which is unbreakable, “really innovative, because I wanted it to be soft…have that sharp design and at the same time keep that comfort and relaxed feeling.

“I was thinking of those silver pillows in The Factory with Andy Warhol, and there is a little Jeff Koons-y feeling, too,” continued Dossena. “It’s like this kind of metal…which is really Paco Rabanne. It can be like a Pop object, and at the same time you can put it in your bathroom like a piece of art.” A mash-up, in other words, of high and low.

He was involved in each step of the creation, including the scents’ outer packaging, with a video tape box-like feel, lined with polyurethane foam, which Dossena considers as giving a new twist on luxury. Each contains a poster, like those from his youth.

“It gives all the information, [including] how you can recycle it,” said Dossena. 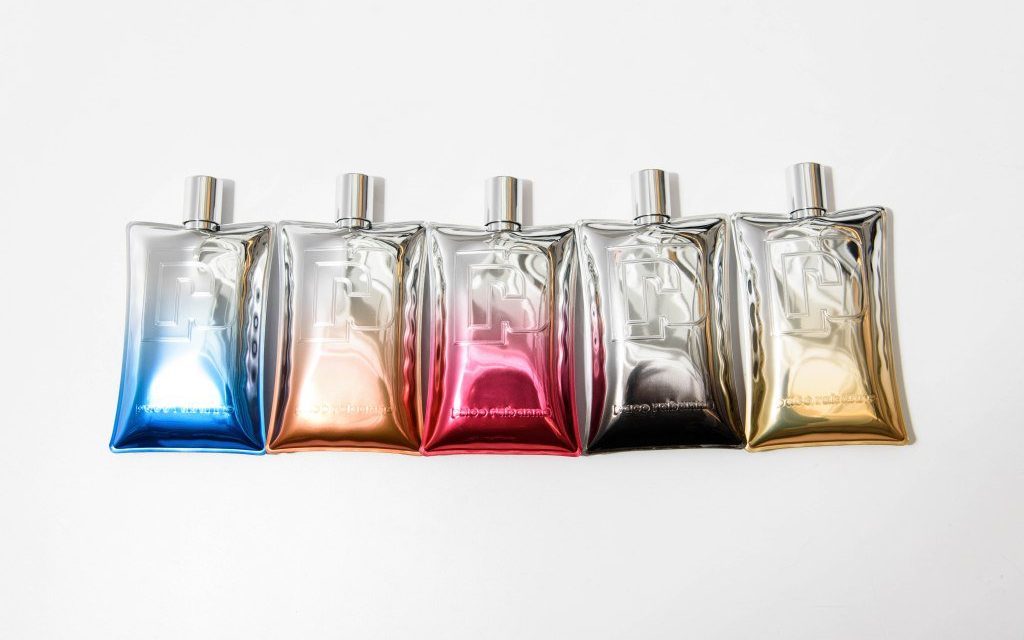 The silver- coloured fragrance bottles are tinged with various hues. “In the perfume industry, I didn’t see that many colours everywhere, which I find interesting for Paco Rabanne. This metallic colour can also give you another clue about which feeling the perfume expresses,” he continued. “I worked that into different characters.”

Strong Me is portrayed by Alton

Mason, a dancer and model, who is fashion- crazy. “He’s really the guy who is dressing without asking himself any other questions [than] does it feel beautiful or expressing what he wants to say,” said Dossena. “He’s really super eccentric in that vibe, and I felt that as a definition of Strong Me it’s really interesting to have this kind of guy.”

Genius Me is channeled through DJ and music producer Bambounou. “I love his music,” said Dossena. “He is this super elegant French guy playing with machines.”

Korean model Hyunji Shin was cast for Crazy Me. “You see there is a world inside her that she lets out sometimes,” said Dossena.

Singer Kelela is Fabulous Me. “She has a really deep way of writing about the world and the world she wants to live in,” said Dossena.

For Dangerous Me, Dossena opted for a female — actress Dree Hemingway. “I found it super interesting to have her there, because she was the first one in the 1 Million ads, with the blonde hair and heels, and she shaved her hair recently,” said Dossena, speaking of another Paco Rabanne fragrance franchise. 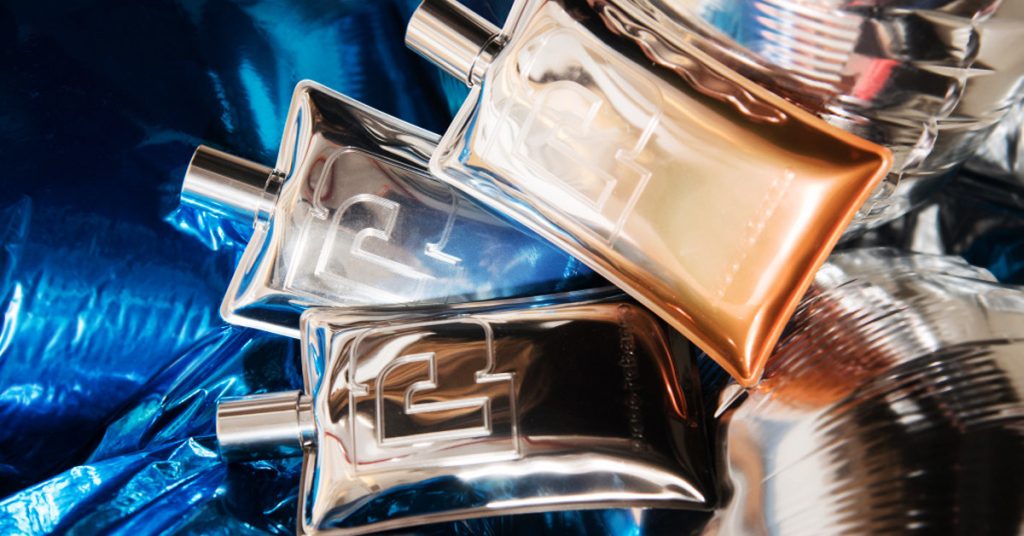 The Pacollection campaign, directed by Sheila Johansson, involves the gang of six hanging around in Ricardo Bofill’s Walden 7 and La Fabrica buildings in Barcelona. “You get this expression of singularity, really particular and free,” said Dossena. “Like in a gang, when you feel even stronger when you are together and express all that palette of feelings and expression with a lot of freedom.”

It’s a fantasized reality, specified Dossena, who characterized it also as having a coolness, effortlessness and sophistication, with “super-strong characters and super-strong looks.”

The spots, coming in various formats for digital and in-store play, are underlined by David Bowie’s song “Heroes.”

Dossena’s olfactive memory is based on sensation. “I loved gasoline’s smell when I was a kid, on the way to holidays,” he said. “The smell of Coca- Cola, because it was sugary, a bit sparkly smell.”

Today, the designer sometimes mixes the scents he sports. He is particular to perfumes whose main notes are apparent from the get-go.

“I insisted that we keep it really free and strong in the combination of ingredients,” said Dossena, of the Pacollection. “I love that it’s a really radical proposition.”

Crazy Me, for instance, has a mélange of mimosa and wasabi notes. Dossena described Genius Me as giving the olfactive sensation of opening a washing machine or having someone ironing nearby. “It’s a really comforting, super clean smell,” he said. “Something that is almost cleaner than clean.

“Fabulous is pumpkin, which is interesting, too,” added Dossena.

“Nothing is too natural,” he continued. “It’s a bit pushed — as if all the notes were a bit artificial or chemical in that sense, which I found super modern and really the way to express that side of Paco Rabanne which is always searching for this other idea of luxury. I find it interesting that everything comes out a little bit synthetic in the fragrances, as well.”

The perfumers behind the scents were IFF’s Dominique Ropion and Alienor Massenet; Firmenich’s Marie Salamagne and Fabrice Pellerin, and Givaudan’s Quentin Bisch.

Dossena said he hopes people will approach the fragrances like fashion, and identify with the Pacollection of characters. “In a different part of the day, you can be genius, you can be crazy, you can be fabulous,” he said.

No scent in the line was market-tested, and perfumers had carte blanche for their creations, meant to express the “we can be heroes” theme and be something never smelled before, according to Vincent Thilloy, senior vice president of prestige designers and alternative brands at Puig. He added there is no gender linked to a perfume.

“We are growing at three-digit growth season after season,” said José Manuel Albesa, Puig’s president of brands, markets and operations. “So we thought it was time to accelerate our One Rabanne strategy. Julien has created a real statement in terms of brand imagery, and it was time to pull all [that] together — fragrance and fashion.”

“For us it’s key to enhance this brand perception, and fashion gives the edge,” added Thilloy.

“This is the first 100 percent co- creation between fashion and fragrance, both teams,” continued Albesa. “As we [Puig] are the owner of the fashion house, we have tremendous opportunity to make both fragrance and fashion speak the same language.”

Today the Paco Rabanne fragrance franchise ranks fourth worldwide, following Chanel, Dior and Giorgio Armani, but the house hasn’t had a collection of scents in its portfolio.

“There are so many collections today on the market; we wanted to be unexpected and really daring — which is the motto of the brand,” said Thilloy.

The new line, with each 62-ml. eau de parfum retailing for 69 euros, will first launch in Paco Rabanne’s boutique on Paris’ Rue Cambon on June 11, followed by Selfridges in London on June 17, and Spain and Germany in July. The U. S., Russia, Mexico and Chile are due to get Pacollection in September, with other markets slated for the next rollout phases. Within the first year, the fragrances should be in 20 to 40 doors, and ultimately in 100 points of sale.

“We want to be really selective [and] where the fashion is also, because it is a project that works together,” said Thilloy.

Everywhere the perfume is sold will be an especially conceived merchandising unit, which includes screens with videos of the characters, headsets through which each one’s story can be heard and Airparfum dispenser systems, created within the Puig Futures platform, for scent sampling.

A Puig executive would not discuss projections, but industry sources estimate Pacollection will generate 40 million euros in retail sales during its first year.

Also upcoming for Paco Rabanne is the launch of a new web site in July, selling fashion worldwide and fragrances in the U.K. and France, before being introduced elsewhere.

“…We wanted to be unexpected and really daring — which is the motto of the brand.”