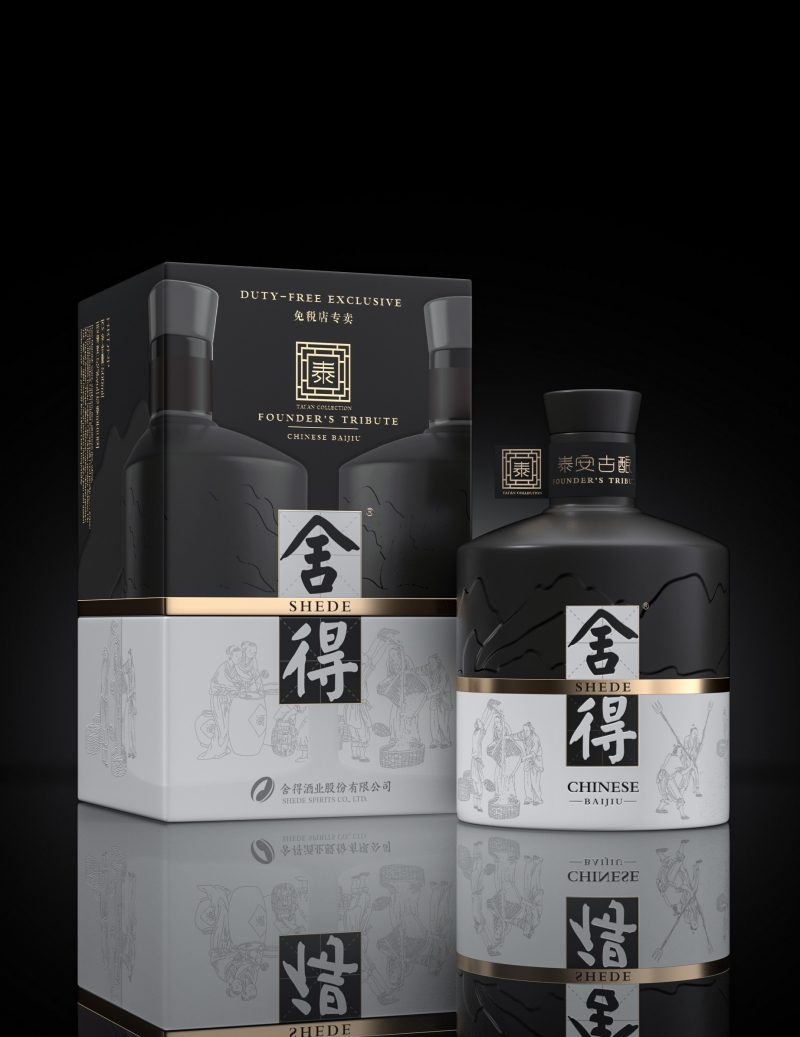 Cognac house Camus has announced a strategic collaboration with Shede Spirits, a leader in China’s premium Baijiu segment. This collaboration is signified through the launch of a duty-free exclusive product –  Shede Founder’s Tribute. A launch event took place on 22nd Apr in Shanghai and the product is expected to be available on the shelf in duty-free in the latter half of 2021.

Camus is helping Shede to develop its reach in domestic duty paid markets in the international arena, with France domestic market and e-commerce in EU leading the way. Recently, Taste Shede, the brand’s flagship product in duty paid markets was launched on Amazon EU.

This collaboration has shown Camus’ determination to further build Baijiu’s impact in the international market, duty free and duty paid. We look forward to embarking on this brand new journey together with Shede Spirits.

THE DUET OF TWO CRAFTSMEN, A BRAND NEW START

“… The collaboration between China’s leading Strong Aroma brand Shede and a world class Cognac brand Camus, is the duet of two craftsmen, a recognition for the quality of Shede, and a brand new start for the internationalization of Shede Spirits. …”

Mr. Pu Jizhou, CEO and Vice Chairman of the Board of Shede Spirits

On 22nd Apr, 60 guests walked the red carpet and entered Club 55, the “it” venue in Shanghai, to witness the unrevealing of Shede Founder’s Tribute, a unique Strong Aroma Baijiu product co-developed by Camus and Shede, two brands with different geographic origin but a shared passion for quality and craftsmanship.

Mr. Cyril Camus, the president of Camus Group, and Mr. Pu Jizhou, the CEO and Vice Chairman of the Board of Shede Spirits, were the co-hosts of this splendid event. The esteemed guests include consul and representative from Egypt and France consulate, representatives from international companies, Chinese government leaders in spirits and free-trade zones, and celebrities from the world of arts & academia. Both hosts made speeches before the product reveal to witness a historic moment unravel.

Cyril Camus made the speech to congratulate both teams’ dedicated effort in bring this product into existence. Camus had looked through a wide selection of Chinese Baijiu brands and eventually found Shede as the first Chinese Strong Aroma Baijiu brand to work strategically and closely with.

The highlight of the event was obviously the reveal of the product. Shede Founder’s Tribute’ is made adhering to the highest quality standard of ‘vintage spirits’: fermented the ancient way in Shede’s oldest pits from Ming dynasty, kick started with Qu (a fermentation starter) following the “1000-Year Classical Tai He” method. The base spirit is aged for a minimum of 6 years and blended with 15 years old vintage Baijiu from the Tai’An workshop The traditional craftsmanship is blended with artistry and inspiration, sparked youthful charm in a vintage spirit, destined to bring new experience beyond our imagination.

This fantastic evening marks the start of the internationalization journey of China Strong Aroma Baijiu, led by Shede. Camus will continue its mission to spread the aroma of Baijiu around the world through the promotion and integration of Chinese culture and Western culture. 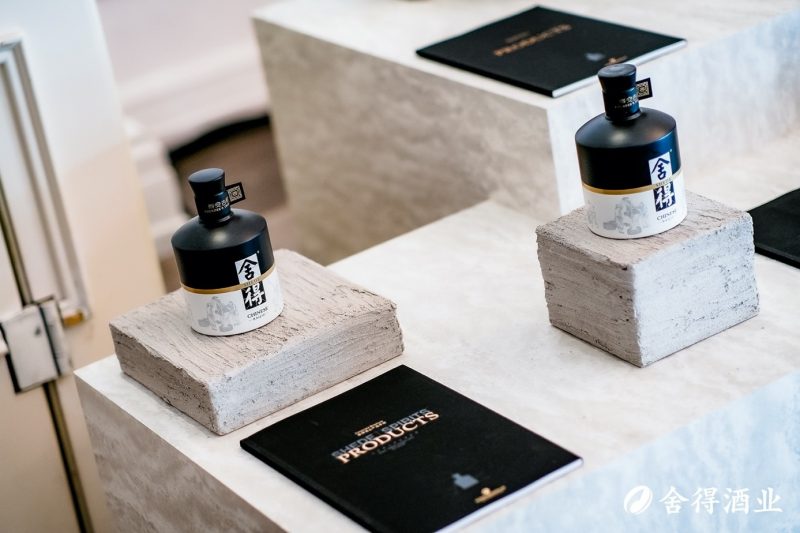 Cyril Camus visit to Shede’s ecological park in 2018 confirmed his intuition that the brand has the potential to be an international hit. Shede has unique brand genes that very much appears to a wide range of demographic group beyond Chinese: its association with widely known Eastern philosophies (Confucianism, Buddhism and Daoism); a minimalistic design that encompasses classic Chinese flairs (a calligraphy brand logo and the Yin & Yang color scheme); and lastly, a shared understanding of “sacrifice to gain” (the literal translation of the brand name “Shede”) with consumers, especially since Shede actively choose to collaborate with great artists, writers, sportsman whom all endured sacrifice to be successful.

Founder’s Tribute, the international debut of Shede, pays tribute to the long tradition of Tai’An Workshop, harmoniously blending its Chinese heritage with a modernist Yin Yang design. Exclusively for sale by Camus at duty-free stores worldwide, Founder’s Tribute upholds the spirit of craftsmanship and the motto of sacrifice, destined to be appreciated by the connoisseur searching for the finer things in life. 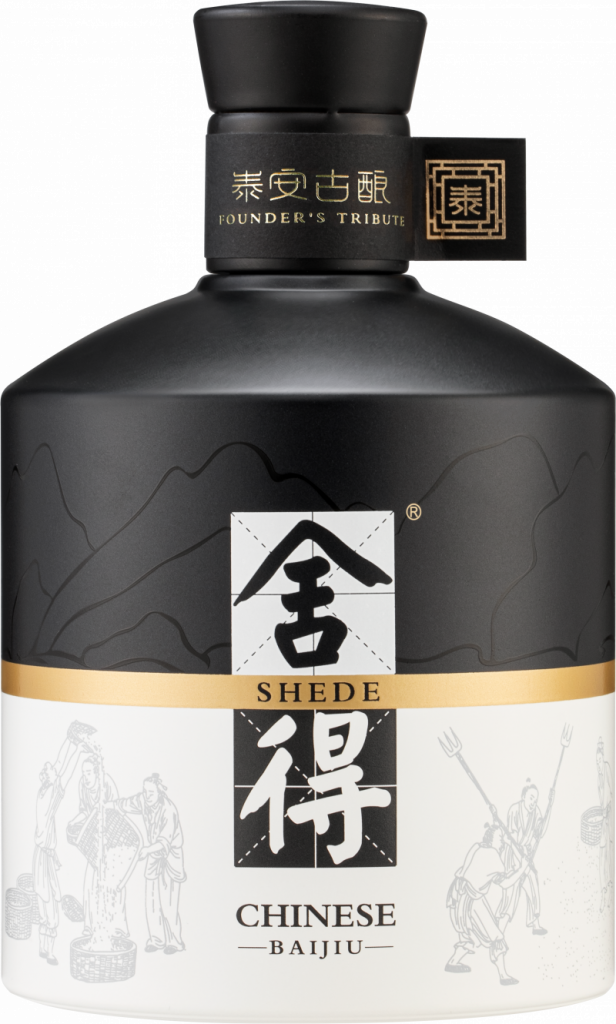 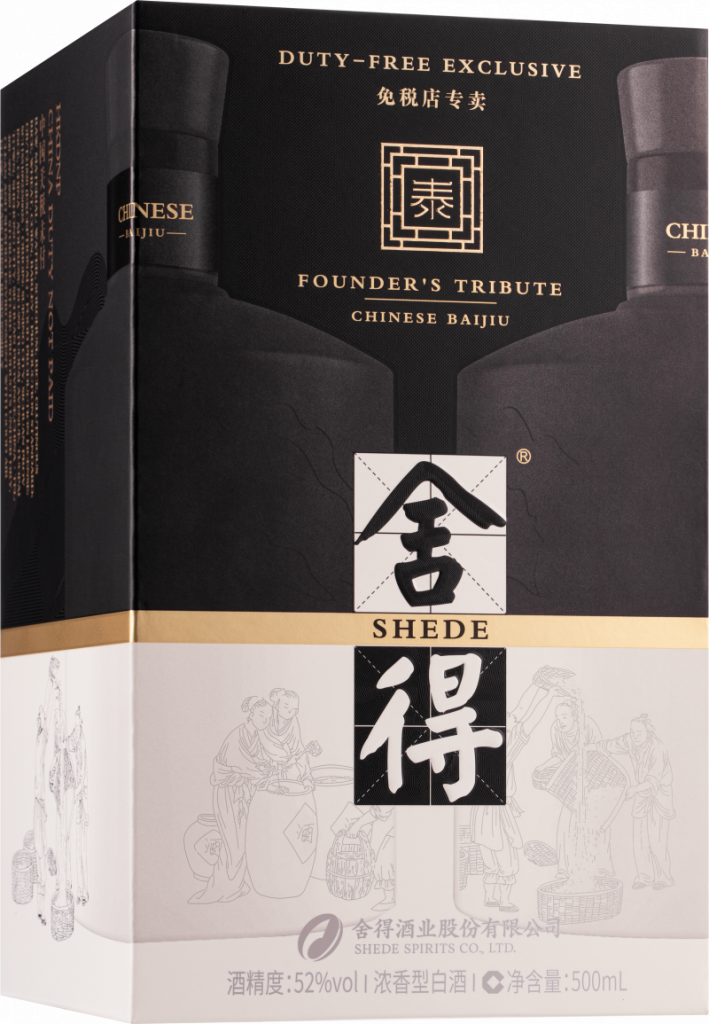 Cyril Camus was living in China in the mid-1990s when he first became acquainted with and fascinated by baijiu.  Convinced of Baijiu’s potential in the international duty-free channel, he brought the leading Baijiu brand Kweichow Moutai into the space and launched a collection of exclusive products, that are now available to international travelers in 400+ outlets in 50 countries

After more than a decade of successful collaboration with Kweichow Moutai which made Baijiu a must-have category for the travel retail industry, Camus has realized consumers’ continuous interest in the lookout for new brands of Baijiu, with different flavor profiles and price points compared to Moutai. A specialty concept under the brand “Spirit of China” (“SoC”)  was born to further spread the aroma of Baijiu around the world. Shede, a leader in Strong Aroma Baijiu (Kweichow Moutai is Sauce Aroma Baijiu) became the first brand selected by Camus to be launched under the SoC concept. We chose Shede for its strength in vintage reserve, ecological focus and its brand positioning as a symbol for Chinese cultural.

Exclusive to the travel retail, SoC only collaborates with premium Chinese Baijiu brands with a storied past, inherited craftsmanship and irreplicable brewing resources. SoC strives to be consumers’ first choice when buying Baijiu and the travel retail expert in the category, and lets the world experience Chinese culture through a carefully curated collection of China’s finest Baijiu.

“Spirit of China” can be translated into both “Chinese spirit” and “national liquor” in Chinese. The meaning of this play on words is signified in the Chinese character 国(guo) of the brand’s logo. This symbolic and auspicious logo is outlined in a red, minimalist, cloud pattern to add a traditional and festive connotation. Focusing on the product packaging design, we learn from traditional Chinese culture and are able to reinterpret Chinese elements through modern, light, luxurious styles. The merchandising with its dual theme color of red and gold, stands out on the shop floor and sends consumers our warm wishes for their prosperity.

Exclusive to the travel retail, SoC offers superb gift choices for family and friends, or even for self-appreciation. 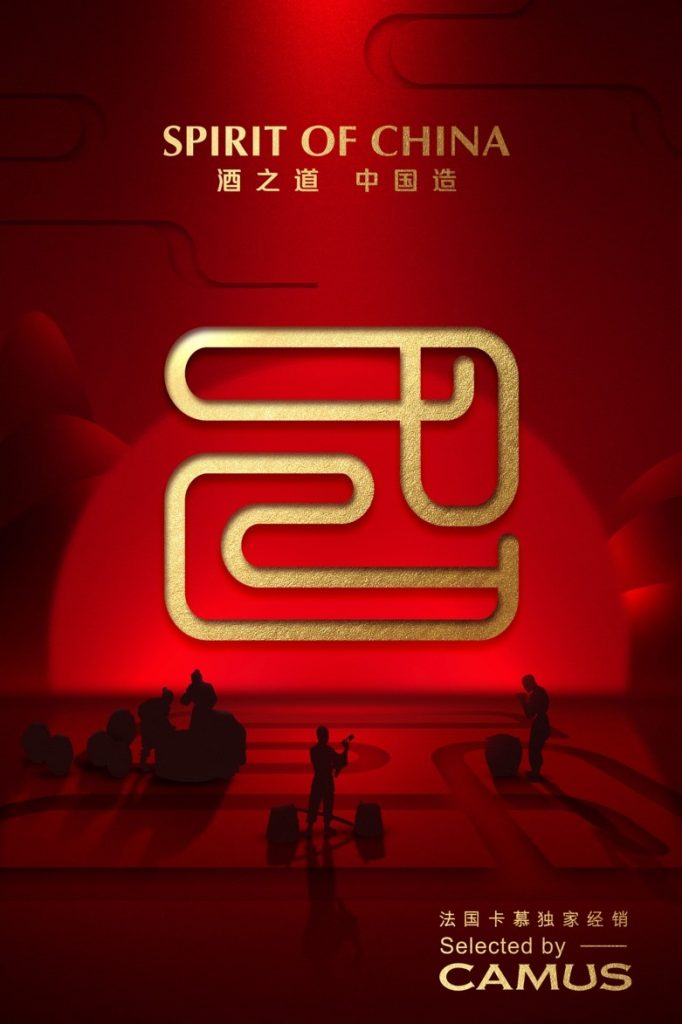 Shede is an iconic name in baijiu, manifesting the wisdom of Chinese philosophy. As one of the top 5 baijiu brands in premium category (RSP range USD 50-120), Shede Spirits has a brand value of $108 billion RMB. Its production adheres to the motto “Sacrifice to Gain”—sacrificing 98% of the raw spirit to preserve only the essential 2%. Moreover, it boasts the world’s largest inventory of aged premium baijiu, fulfilling the commitment: “Every bottle aged to perfection”. Shede is also fully committed to its social responsibilities, producing its baijiu in a meticulously maintained ecology park. Situated within the park is one of the oldest liquor making workshops in China, Tai’An workshop, credited as a culinary heritage of China.

Founded in 1863, CAMUS is the largest family-run, independent Cognac House today, owned and operated by the Camus family for five generations.

CAMUS cultivates a passion for exceptional cognacs, seeking the utmost refinement with sincerity, passion and determination. The mainspring of CAMUS is to create the most aromatic, most beautiful Cognacs for the Pleasure of those who enjoy the Finest things in Life. This perfectionist attitude has guaranteed CAMUS Cognacs some of the most important awards in the spirits industry.

Under the leadership of Cyril Camus, the House of CAMUS now employs people spread across eight countries and three continents and has subsidiaries in China and the United States, as well as sales representation offices in Russia, China and Hong Kong.

Today CAMUS Wines & Spirits is an international independent distributor of a wide variety of premium third-party wines & spirits brands such as Loudenne wines and Lambay Irish Whiskey. For over a decade, CAMUS, has brought China’s most iconic baijiu – Kweichow Moutai – international recognition in travel retail and taken it to prime position among the world’s most prestigious spirits.

In 2017, CAMUS was awarded the Entreprise du Patrimoine Vivant label which acknowledges French companies for their craftsmanship and excellence. 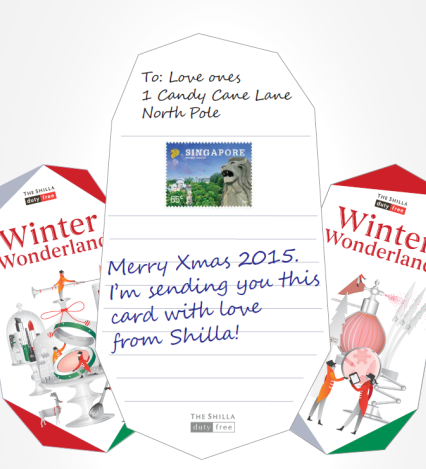 Shilla Duty Free gets in the Christmas mood 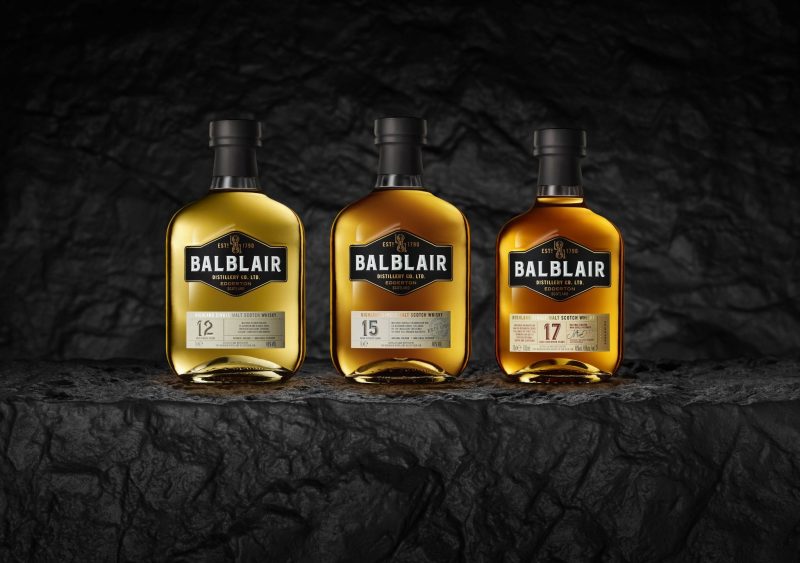 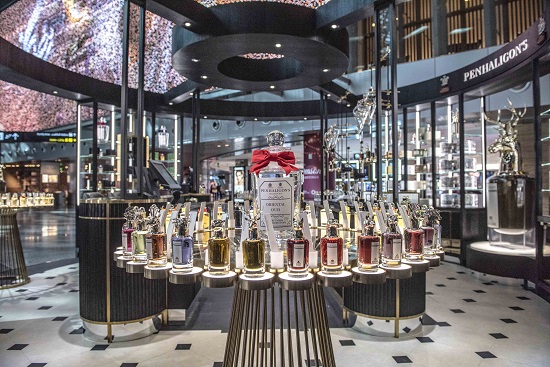