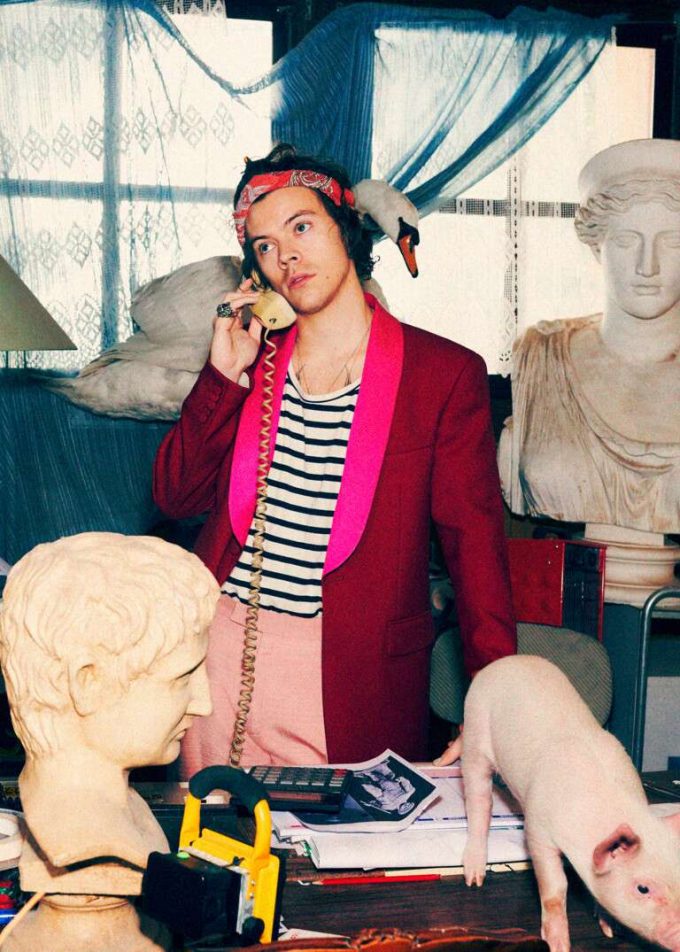 Harry Styles (and his farmyard friends) are back for Gucci Tailoring

The singer, songwriter and actor is playing an eccentric yet nonchalant character accompanied by a gang of animals, wearing the latest sartorial pieces from Gucci Pre Fall 2019 collection.

In a dreamscape of statuary and artworks, Harry Styles appears in the new Gucci Tailoring campaign, creatively envisioned by Creative Director Alessandro Michele, shot by Harmony Korine and art directed by Christopher Simmonds.

The former One Directioner has starred in two of the designer’s campaigns for Gucci’s Tailoring collections and also co-chaired this year’s Met Gala along with Michele, where he hit the pink carpet dressed exclusively in head-to-toe Gucci. Now, Styles is back with Gucci’s most eclectic advertising campaign to date.

Styles stands out in several new pre-fall 2019 pieces, including the electric blue velvet trouser suit which the singer first wore in April at the Rock & Roll Hall of Fame Induction Ceremony. Michele’s boundary-blurring vision of men’s formalwear sees Styles rock a £1,600 houndstooth wool cape over a suit jacket and waistcoat, all paired with relaxed jogging bottoms and embellished slides. Other images show pink blazers coupled with casual breton tops and bandanas.The eccentric outfits are heavily accessorised, most notably with handbags. Styles is photographed holding a men’s tote bag, currently available to buy now for £525, while another image shines a splotlight on the unisex Gucci Zumi shoulder bag.

Fans of Styles’ previous Gucci campaigns will also be pleased to see that his gang of farmyard friends have made a return. This time, lovable piglets are seen scampering around, while a flock of swans have been introduced to the brood. 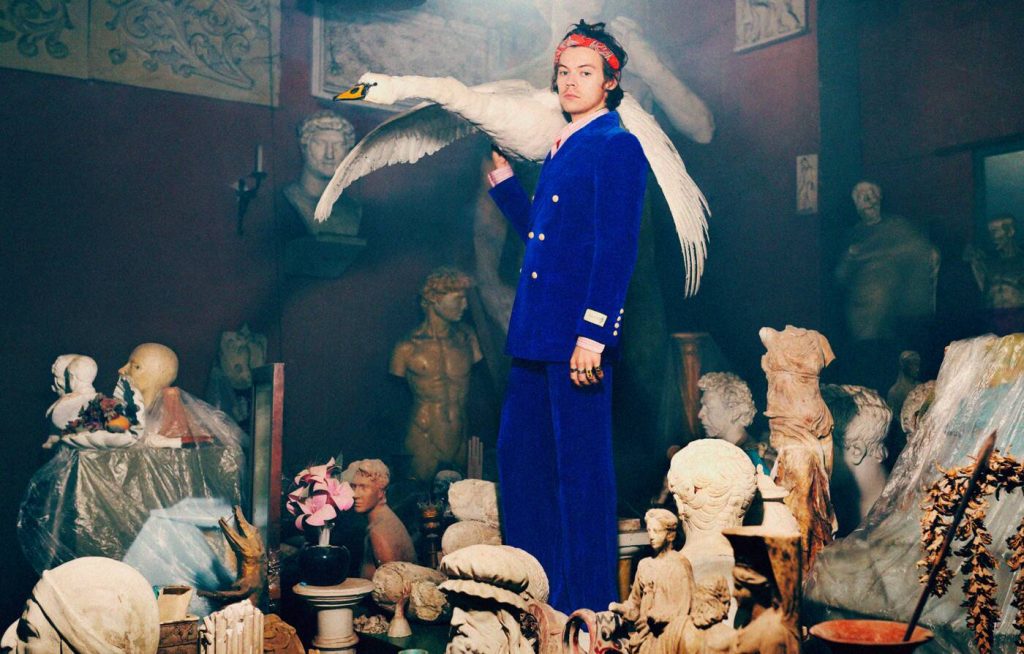 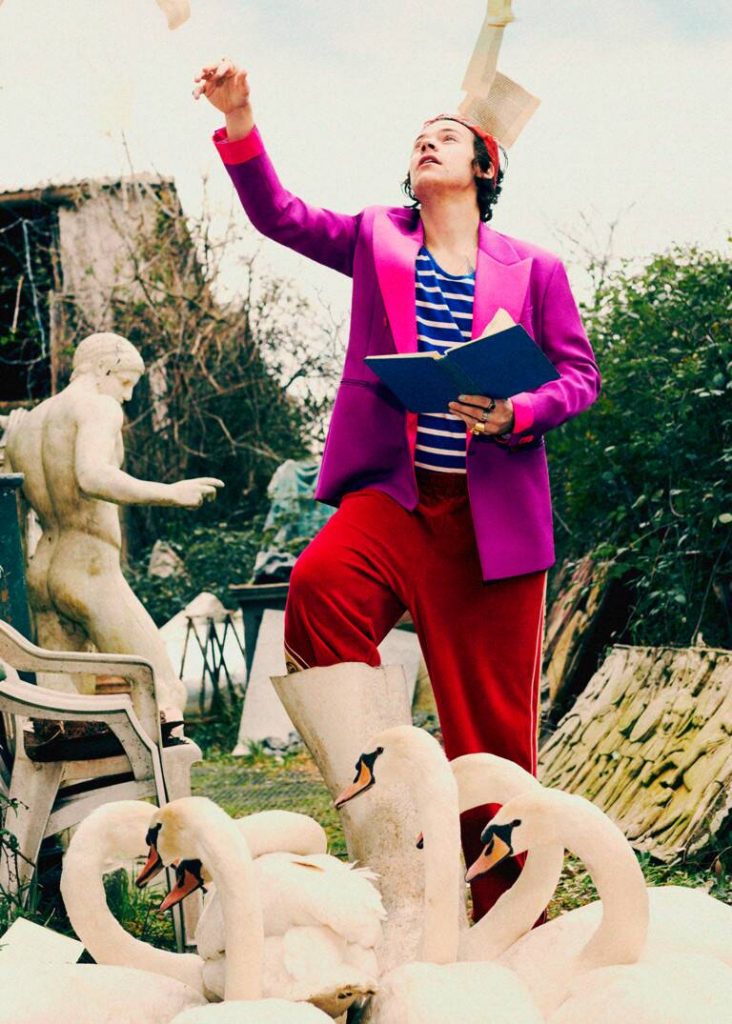 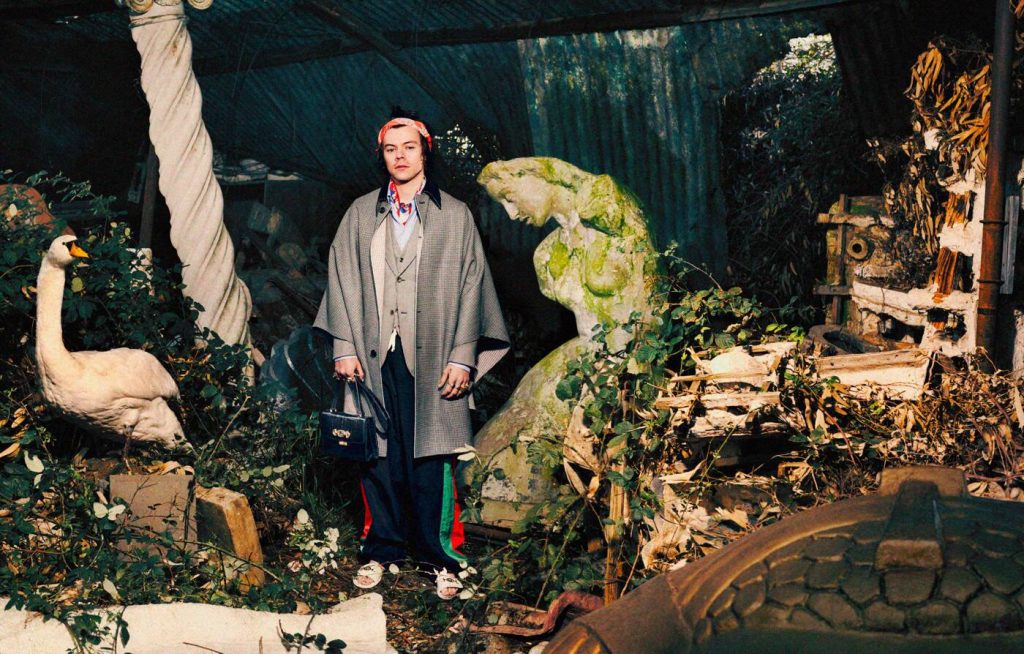