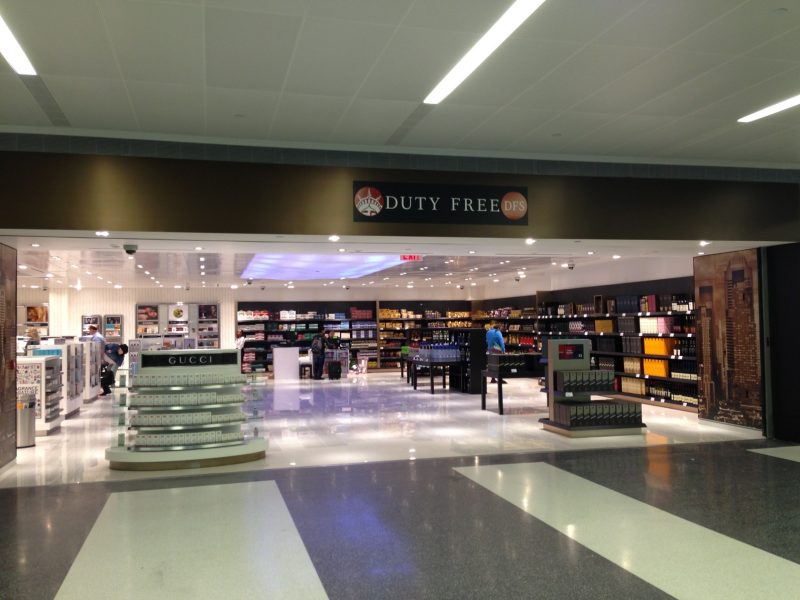 Match any journey through New York JFK Airport to the duty free and luxury shopping available on departure, inflight and on arrival with Duty Free Hunter.

John F. Kennedy International Airport (IATA: JFK, ICAO: KJFK, FAA LID: JFK) is a major airport in the borough of Queens in New York City, owned by the City of New York and operated by the Port Authority of New York and New Jersey under a long-term operating lease. It is about 12 miles (19 km) southeast of Lower Manhattan. It is the busiest international air passenger gateway in the United States, handling more international traffic than any other airport in North America. It is also the third-leading freight gateway to the country by value of shipments. In 2014, the airport handled 53,254,362 passengers, making it the 18th-busiest airport in the world and sixth-busiest in the United States by passenger traffic. Together, JFK International, LaGuardia, and Newark Liberty airports, all operated by the Port Authority of New York and New Jersey, are the largest airport system in the United States, second in the world in terms of passenger traffic, and first in the world by total flight operations.

Dedicated as New York International Airport in 1948, the airport was more commonly known as Idlewild Airport until 1963, when it was renamed in memory of John F. Kennedy, the 35th President of the United States.

Over 90 airlines operate out of JFK. It is the base of operations for JetBlue Airways and is a major international gateway hub for American Airlines and Delta Air Lines. In the past, it has been a hub for Eastern Air Lines, Gemini Air Cargo, National Airlines, Pan American World Airways and Trans World Airlines. It is one of only three airports in North America, the other two being Toronto Pearson International Airport and Los Angeles International Airport (effective June 18, 2015), with scheduled direct flights to all six inhabited continents.

Terminal 1 was opened in 1998, 50 years after the opening of JFK, at the direction of the Terminal One Group, a consortium of four key operating carriers: Air France, Japan Airlines, Korean Air and Lufthansa. This partnership was founded after the four airlines reached agreement that existing international carrier facilities were inadequate for their needs. In addition to the aforementioned European airlines, most European and some Asian carriers land at Terminal 1, such as Alitalia, Austrian Airlines, and Saudia. It was designed by William Nicholas Bodouva + Associates. Terminal 1, along with Terminal 4, is one of two terminals at JFK Airport that has the capability to handle the superjumbo Airbus A380 aircraft, which are flown by Air France on the route from Paris Charles De Gaulle, Lufthansa on the route from Frankfurt Airport and Korean Air on the route from Incheon Airport. Air France operated Concorde here until 2003. Terminal 1 has 11 gates.

Terminal 2 opened in 1962 as the home of Northeast Airlines, Braniff and Northwest Airlines, and is now exclusively used and operated by Delta Air Lines. After the demise of Northeast Airlines and Braniff, the building was taken over by Pan American World Airways, and subsequently by Delta. Since the opening of the Terminal 4 addition in May 2013, Terminal 2 has been designated as the “C” gates by Delta, and has 7 Jetway-equipped gates (C60-C63, C67-C70) and 17 stands for Delta Connection carriers (C64A–H, C64J, C66K–N, C66P–S). T2 will be closed once Phase Two of the T4 expansion is completed by 2015.

Terminal 4 replaced the former International Arrivals Building in May 2001. Terminal 4 was developed by LCOR, Inc and is managed by JFK International Air Terminal (IAT) LLC, a subsidiary of the Schiphol Group. This terminal serves as a major international hub for Delta Air Lines and was the first one in the United States to be managed by a foreign airport operator. It also serves as the main terminal for mostly Asian (including all the Middle Eastern carriers except Saudia and Qatar Airways) airlines, and some African and European airlines. Terminal 4 is the major gateway for international arrivals at JFK. Opened in 2001 and designed by Skidmore, Owings and Merrill, the 1,500,000-square-foot (140,000 m2) building was built at a cost of $1.4 billion and replaced JFK’s old International Arrivals Building, or simply IAB, which opened in 1957. The terminal was expanded in the late 2000s and early 2010s. The first phase of Delta’s $1.4 billion project at the airport[51][53]—which includes nine new international gates, additional baggage space, a centralized security checkpoint (moving two checkpoints into one location just after check-in), and customs and border-security facilities—was completed on May 24, 2013. Terminal 4 also serves many international airlines daily, including few Skyteam airlines and the majority of Star and non-aligned airlines.

Terminal 4 has 26 gates in two concourses: A2–A7, B20, B22–B41. As of 2013, Delta and the Port Authority of New York and New Jersey agreed to an additional $175 million phase II expansion, which will allow Delta to construct 11 regional jet gates at Terminal 4, as well. The agreement allows Delta to eliminate a proposed physical connection it has previously planned to build with its existing Terminal 2 and instead close T2. The work on the Delta hub has commenced, with funding primarily from $900 million in special-project bonds. Delta will seek funding for the regional jet expansion from the New York City Industrial Development Agency.

Concourse A has six gates, numbered A2–A7. Concourse B has twenty gates, numbered B20–B41, with the exclusion of B21. As Terminal 4 was built during the construction of the AirTrain, the AirTrain station was built inside the terminal building. Other AirTrain stations are built across from terminal buildings. Delta Air Lines has also moved much of its operations to T4, as it expands operations beyond T2, with T3 now closed. Concourse A serves as the stopping location for Asian and some European airlines, whereas Concourse B is made up of Delta flights, and a number of Asian and some European airlines.

Like terminal 1, it is Airbus A380-compatible, and Emirates and Singapore Airlines currently use Terminal 4 for their Airbus A380s; in 2015, Asiana Airlines (May 28) and Etihad Airways (December 1) will also operate their A380s at Terminal 4. Virgin Atlantic Airways, Kuwait Airlines, KLM, South African Airways, Arik Air, China Airlines and China Southern Airlines also operate out of Terminal 4.

Terminal 5 opened in 2008 for JetBlue Airways, the manager and primary (then only) tenant of the building, and serves as the base of their large JFK hub. This particular terminal handles exclusively North American regional flights- American domestic flights, Caribbean flights and Hawaiian Airlines flights to Honolulu, Hawaii. The terminal was re-designed by Gensler and constructed by Turner Construction, and it is known for its many gift shops and gourmet restaurants, including a steak house and a sushi restaurant. It sits behind the preserved Eero Saarinen-designed terminal originally known as the TWA Flight Center, which is now connected to the new structure and is considered part of T5. The Saarinen building is currently closed for refurbishment; it is unclear when the building will reopen or what purpose it will have. Saarinen also designed the terminal at Washington Dulles International Airport. The active T5 building (including the international arrivals section named T5i) has 29 gates (26 until November 2014): 1–12 and 14–30 (with gates 25-30 handling international flights that are not precleared; gates 28-30 opened in November 2014). The terminal is also used by Hawaiian Airlines, which partnered with JetBlue and began service in Terminal 5 in June 2012, and Irish flag carrier Aer Lingus, whose flights arriving into JFK have already been pre-cleared in Ireland. Aer Lingus previously used Terminal 4 prior to the introduction of preclearance in Ireland, moving to T5 on April 3, 2013. On November 12, 2014, JetBlue opened the International Arrivals Concourse (T5i) at the terminal. Airspace Lounge opened an airport lounge near Gate 24 in July 2013 and Aer Lingus is scheduled to open an airport lounge in 2015.

Terminal 7 was designed by GMW Architects[65] and built for BOAC and Air Canada in 1970. It is currently operated by British Airways. This terminal is the only airport terminal operated by a foreign carrier on US soil, though Terminal 1 is operated by a consortium of foreign carriers serving the building. A variety of Oneworld alliance carriers operate out of Terminal 7 at this time, including British Airways, Cathay Pacific, Iberia (which is owned by the same parent company as British Airways), and Qantas. Star Alliance carriers United Airlines and ANA use the terminal as well. Icelandair and Aerolíneas Argentinas also operate out of Terminal 7. Between 1989 and 1991, the terminal was renovated and expanded at a cost of $120 million. The expansion was designed by William Nicholas Bodouva + Associates, Architects. In 1997, the Port Authority approved British Airways’ plans to renovate and expand the terminal. The $251 million project was designed by Corgan Associates and was completed in 2003.[68] The renovated terminal has 12 gates.[69] In 2008, British Airways unveiled a $30 million, 18-month-long project to enhance its premium ground facilities at the terminal.

British Airways is currently evaluating the future of Terminal 7, as its lease with the Port Authority ends in 2015. After the alliance between BA/Iberia and American Airlines was finalized in 2010, American began talks to move BA and Iberia into an expanded Terminal 8. BA temporarily moved one of its flights to Terminal 8 in March 2013 due to ongoing renovation work in Terminal 7.

Terminal 8 In 1999, American Airlines began an eight-year program to build the largest passenger terminal at JFK, designed by DMJM Aviation to replace both Terminal 8 and Terminal 9. The new terminal was built in four phases, which involved the construction of a new midfield concourse, demolition of the old Terminal 9, and finally demolition of the old Terminal 8. It opened in stages between 2005 and had its “official” opening in August 2007. It is a major Oneworld hub, and American Airlines is the major Oneworld carrier at Terminal 8. American is the largest carrier in and manager of the terminal, and is the third largest carrier at JFK. In addition to operations at Terminal 7, some Oneworld airlines including Finnair, Royal Jordanian Airlines, Air Berlin, Qatar Airways, LAN Airlines (and its affiliates), TAM Airlines and US Airways operate out of Terminal 8.

The terminal is twice the size of Madison Square Garden. It offers dozens of retail and food outlets, 84 ticket counters, 44 self-service kiosks, 10 security checkpoint lanes and a U.S. Customs and Border Protection facility that can process more than 1,600 people an hour. Terminal 8 has an annual capacity of 12.8M passengers. It has two American Airlines Admirals Clubs and a Flagship Lounge for premium class passengers. 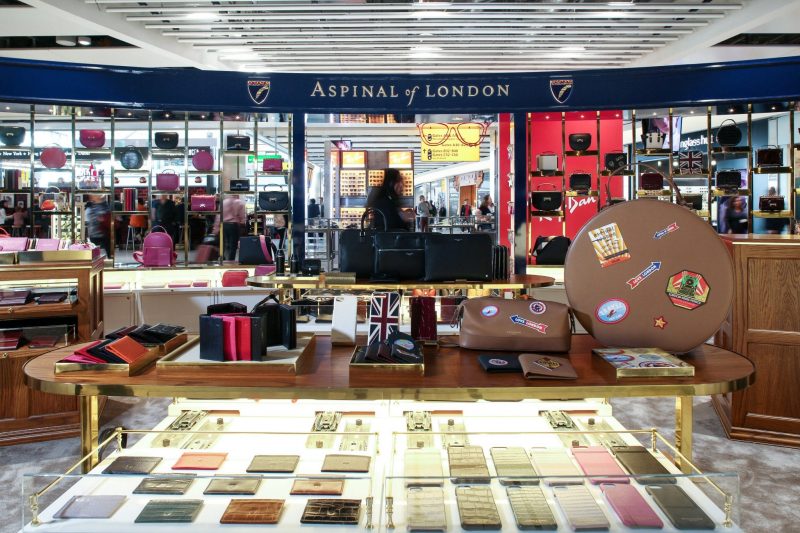 Aspinal of London pops up at Heathrow T5 for the Summer