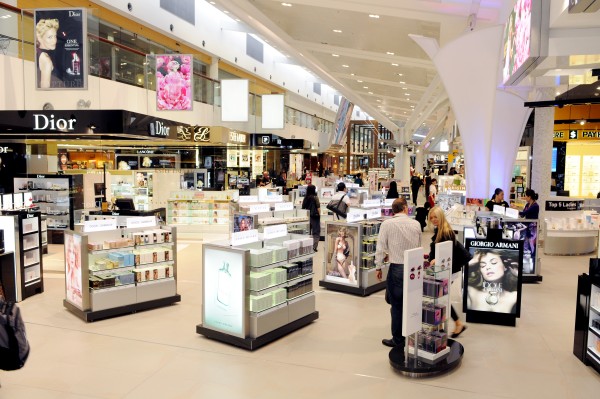 Match any journey through Sydney Kingsford Smith Airport to the duty free and luxury shopping available on departure, inflight and on arrival with Duty Free Hunter.

Sydney (Kingsford Smith) Airport[6] (also known as Kingsford-Smith Airport and Sydney Airport; IATA: SYD, ICAO: YSSY; ASX: SYD) is an international airport located 8 km (5 mi) south of the city centre, in the suburb of Mascot in Sydney. It is the only major airport serving Sydney, and is a primary hub for Qantas, as well as a secondary hub for Virgin Australia and Jetstar Airways. Situated next to Botany Bay, the airport has three runways, colloquially known as the “east–west”, “north–south” and “third” runways.

Sydney Airport is one of the oldest continuously operated airports in the world, and the busiest airport in Australia, handling 35,630,549 passengers in 2011 and 326,686 aircraft movements in 2013. It was the 31st busiest airport in the world in 2012. The airport is managed by Sydney Airport Corporation Limited (SACL) and the current CEO is Kerrie Mather. Currently 46 domestic and 43 international destinations are served to Sydney directly.

Sydney Airport has three passenger terminals. The International Terminal is separated from the other two by a runway, therefore connecting passengers need to allow for longer transfer times.

Terminal 1 was opened on 3 May 1970, replacing the old Overseas Passenger Terminal (which was located where Terminal 3 stands now) and has been greatly expanded since then. Today it is known as the International Terminal, located in the airport’s north western sector. It has 25 gates (thirteen in concourse B numbered 8–37, and twelve in concourse C numbered 50–63) served by aerobridges. There are also a number of remote bays, though these are rarely used. It can accommodate the Airbus A380 with flights to and from Singapore on Singapore Airlines; Dallas/Fort Worth, London via Dubai, Los Angeles and Hong Kong (in Summer and Chinese New Year) on Qantas; Dubai and Auckland on Emirates; and Guangzhou (in Summer) on China Southern Airlines. The terminal building is split into three levels, one each for arrivals, departures and airline offices. The departure level has 20 rows of check-in desks each with 10 single desks making a total of 200 check-in desks. The terminal also has an observation deck located on the rooftop. The terminal hosts eight airline lounges: Two for Qantas, and one each for Etihad Airways, Air New Zealand, Singapore Airlines, Emirates, American Express and SkyTeam. The terminal underwent a major $500 million redevelopment that was completed in 2010, by which the shopping complex was expanded, outbound customs operations were centralised and the floor space of the terminal increased to 254,000 square metres (2,730,000 sq ft).

Terminal 3
Terminal 3 is a domestic terminal, serving Qantas with QantasLink flights having moved their operations from Terminal 2 to Terminal 3 on 16 August 2013[28][29] Originally, it was home for Trans Australia Airlines (later named Australian Airlines). Like Terminal 2 it is located in the north-eastern section. The current terminal building is largely the result of extensions made during the late 1990s. There are 14 parking bays served by aerobridges, including two served by dual aerobridges. Terminal 3 features a large Qantas Club lounge, along with a dedicated Business Class and Chairmans lounge. Terminal 3 also has a ‘Heritage Collection’ located adjacent to gate 13, dedicated to Qantas and including many collections from the airline’s 90-plus years of service. It also has a view of the airport’s apron and is used commonly by plane-spotters.